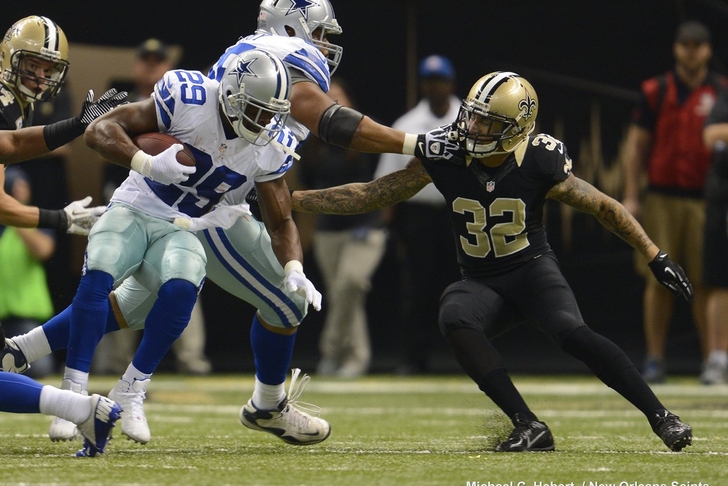 The New Orleans Saints made it interesting, but the Dallas Cowboys held on for a convincing 38-17 victory. The Saints nearly completed the comeback, but a 31-3 fourth quarter deficit was too much to overcome and Dallas shut the door thanks to a late fourth quarter score. The Saints are suddenly 1-3, while Dallas is now 3-1. Get ready for the talking heads to overreact to what happened Sunday Night.

Here are the five things we learned from this Sunday Night Football Showdown:

5. A Healthy Romo Is A Dangerous Romo

That was the best I've seen Romo play all season. He looked great throwing and even running the ball. Couple a healthy Romo with the way Murray has been running, and the Dallas offense is one to be feared.

Nearly everyone (myself included) expected the Cowboys defense to be terrible this season. Perhaps even historically terrible. But here they were on Sunday Night, where Dallas has normally struggled, dominating the Saints. New Orleans was shutout in the first half. The Cowboys allowed just a field goal in the third quarter. The Saints didn't score a touchdown until the fourth quarter, when the game was out of reach.

3. Could DeMarco Murray Rush for 2,000 Yards This Season?

Murray is just the fourth player in NFL history to run for 100 yards and a touchdown in each of his first four games. The last player to do that was some guy named Emmitt Smith. The other two were O.J. Simpson and Jim Brown. That's crazy elite company. He has 534 yards this season, meaning he is on pace for 2,136 yards this season. Obviously it's still early, but that mark would give Murray the single season NFL rushing record. However, he's had injury problems in the past, so that will always be a concern.

2. The Saints Shouldn't Panic Quite Yet

Yes, the Saints are 1-3 and haven't looked that great this season. But they have one of the better QB-coach combos in Drew Brees and Sean Payton. They are only one game back in the NFC South, although the OT loss to the Atlanta Falcons could hurt them. I don't expect the Saints to look like they did tonight for the rest of the season. I don't know if they'll make the playoffs, but they'll have a chance.

1. Dallas Is A Playoff Contender

That was a dominant performance against a team many thought was a sure-fire a playoff squad. Dallas has been the definition of average the past few seasons, but maybe this is the season they get back to the playoffs. But the Cowboys will still need to get over their December blues if they want that to happen. Don't overreact to Dallas' performance and starting calling them Super Bowl contenders, but the Cowboys will be in the mix come December.