5 NFL Teams With No Chance Of Making The 2015 Playoffs 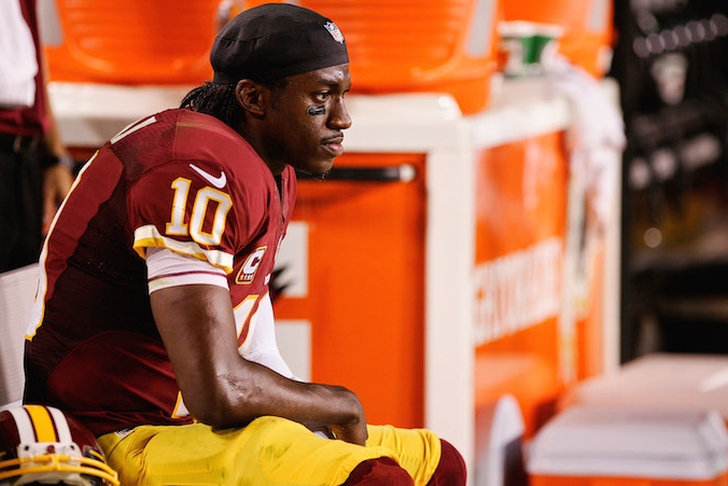 Every team in the NFL starts the season with the same goal of winning the Super Bowl, but that goal is extremely out of reach for some franchises. Here are five teams that have absolutely no chance of making the playoffs:

Washington made some nice strides in free agency by upgrading their defense, but their offense has some MAJOR questions marks - particularly at the quarterback position. Robert Griffin III will begin the season as the starter, but he has to prove he consistently play at a high level for the Redskins to have any kind of success this season. Oh, how the mighty have fallen. Just two years after losing to the Seattle Seahawks in the NFC Championship Game, the 49ers are in danger of becoming one of the worst teams in the league. San Francisco had the worst offseason in the entire league, losing numerous key players to other teams in free agency and to unexpected retirements. With a new head coach in the toughest division in football, the 49ers will struggle mightily this year.

Even if Marcus Mariota is the savior Titans fan are hoping he will be, Tennessee doesn't have the overall team talent to make the playoffs. They're lacking any true offensive weapons and their defense is average. While the Titans seem to be moving in the right direction, they're still a year or two away.

Cleveland's defense is one of the best in the league, but their offense is absolutely atrocious. Someone - whether that's Johnny Manziel, Josh McCown, or someone else - needs to prove they can be a competent starting quarterback before Browns fans can look towards the postseason. The Jaguars have a lot of promise on both sides of the ball, but they still need another year for their young players to grow and develop before they really challenge for a playoff spot.