5 2016 NFL Draft Prospects to Watch in the Belk Bowl 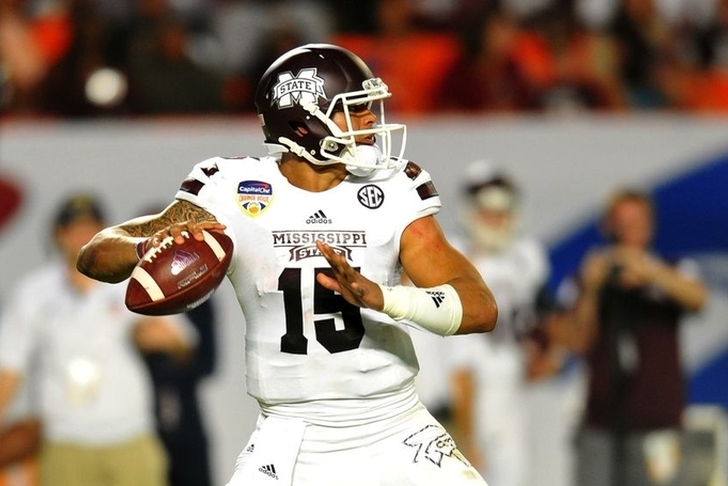 The Belk Bowl kicks off at 3:30 Eastern time on December 30. Featuring the Mississippi State Bulldogs and the N.C. State Wolfpack, the Belk Bowl is pretty one sided as far as NFL Draft prospects are concerned.

As far as the five draft prospects, four of them are on the Bulldogs.

QB # 15 Dak Prescott 6' 2" 230 lbs (2015 Stats: 3,413 YDS, 25 TD, 4 INT; Rushing: 541 YDS, 10 TD)
Dak Prescott has been one of the top collegiate quarterback the past two seasons and is a dual threat quarterback with good passing ability. He was in the Heisman conversation for much of the 2014 season and has become a "hero" of sorts in Starkville for the Bulldogs. He outperformed his three-star rating and become the best player in Mississippi State history, who's to say he can't outplay his draft stock?

Team Projection: Houston Texans (if they don't go QB with their first pick, Prescott would be strong pick)

WR #1 De'Runnya Wilson 6' 5" 225 lbs (2015 Stats: 55 REC, 882 YDS, 9 TD)
Wilson was a two-sport star athlete in high-school. He played basketball for his first three years before starring in football his senior year. A guy who only played one season of football in high-school to where he is now as a junior in college, he has to be doing something right. His size is something that jumps out right away and he flashes very strong hands on many impressive catches. He hasn't declared for the draft yet and didn't ask for a draft grade either, still it's hard to see him staying another year with Prescott leaving. Wilson is still learning the position and coaching at the next level could make him dangerous.

Team Projection: Carolina Panthers (towers of Benjamin, Funchess and Wilson could cause nightmares for cornerbacks)

DT # 98 Chris Jones 6' 5" 308 lbs (2015 Stats: 39 TKL, 7.5 TFL, 2.5 Sacks)
Jones was a phenomonal freshman who the Bulldogs expected to improve, while the level of play hasn't dropped it also hasn't improved drastically. Only a Junior, Jones could decide to not declare although it is believed that he will head to the NFL. Good footspeed for his size and shows a promising bullrush. Jones dropped weight going into this season and lined up at both defensive tackle and end positions, something that can only help his draft stock.

CB # 23 Taveze Calhoun 6' 1" 182 lbs (2015 Stats: 37 TKL, 6.5 TFL, 2 INT)
Calhoun has good size for the cornerback position and we be on display in the East-West shrine game. With teammate Will Redmond out for the majority of the season, Calhoun was tasked with guarding the opponents top receivers. Something that stuck out was the fact that he played through the whistle, regardless of if the play was going toward him or not. An attribute that NFL scouts will love.

QB # 12 Jacoby Brissett 6' 3" 235 lbs (2015 Stats: 2448 YDS, 19 TD, 4 INT; Rushing: 303 YDS, 5 TD)
The scouts are all over the place with Brissett. A transfer from Florida, has played his final two seasons at N.C. State and helped improve the program. Brissett excels in making plays out of broken plays, he's very hard to bring down and keeps his eyes downfield. Will need some polishing at the next level, only a two-year starter, but there is certainly potential here.

Team Projection: Dallas Cowboys (Sit behind Tony Romo for a few seasons and learn from one of the best)