4 Teams Who Won't Win A Super Bowl In Your Lifetime 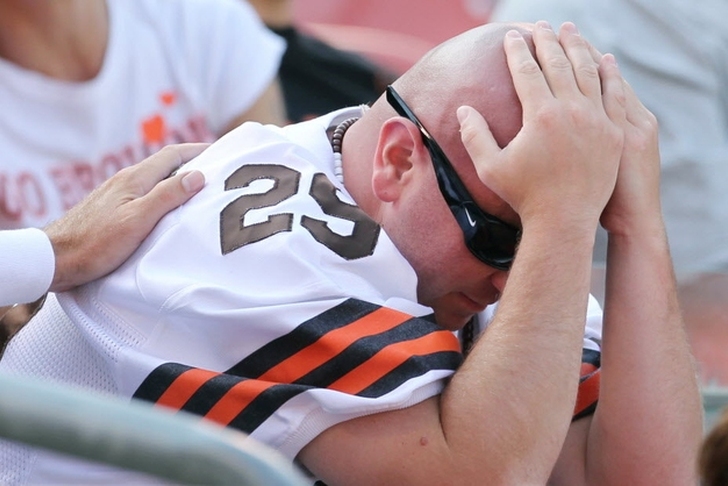 Let's just get one thing out of the way -- we're not claiming we know how long your lifetime is going to last. We've given up tarot cards and we only use our crystal ball to fail miserably in our fantasy football leagues. However, if we're sure of anything in this world, it's that these next four teams won't be hoisting the Lombardi Trophy anytime soon. That is, unless it's for some weird FOX pregame photo shoot.

Let the hate mail flood in. Here's the 4 Teams Who Won't Win A Super Bowl In Your Lifetime. The Bills haven't made the playoffs since you were hoarding canned corn and astronaut ice cream for Y2K. Unless they get a voodoo priest to do a Norwood exorcism in the near future, Buffalo fans will be living off of Tums and whiskey cocktails for decades to come.

Daniel Snyder is 50 years old. However, that's just ten years old in evil robot years. So, it necessarily follows that Snyder will be throwing the GDPs of small, island countries at overrated name free agents from here to the next ice age.

Snyder is what you'd get if you decided to splice Jerry Jones and Al Davis' genes without adding in their ambition or actual track records for success. Redskins fans deserve better than watching a Jared Fogle lookalike kick over the franchise again and again like an angry toddler with his Lincoln Logs.

Ever since Browns fans woke up without a team after Art Modell's Hamburgler caper, God has upped his hate quotient for Cleveland to levels previously reserved for premarital sex and Rob Schneider movies.

The Cleveland Browns have made the playoffs just once (2002) since rising from the ashes in 1999 and have posted a winning record just twice. We're not math majors here at Chat Sports, but we just carried the one and it's not looking rosy for Browns fans. Unless Browns management gets some therapy and gets over their aversion to actual quarterbacks (Brandon Weeden, anyone?), this ain't changing.

It's how God intended it. Or something. The flights from London are a killer for business travelers, let alone 300-pound men packing into a jet like ex-drama students in a clown car. Jet-lag is real. There's no way...

Wait, they're still in Jacksonville?

Oh, ok. Well, they're the Jags. And Mark Brunell's retired. So, put two and two together.

(NOTE: The author reserves the right to eat crow and/or deny ever writing this article if one or more of these predictions prove false. Also, you can't have the author's address. He's scared enough as it is right now.)