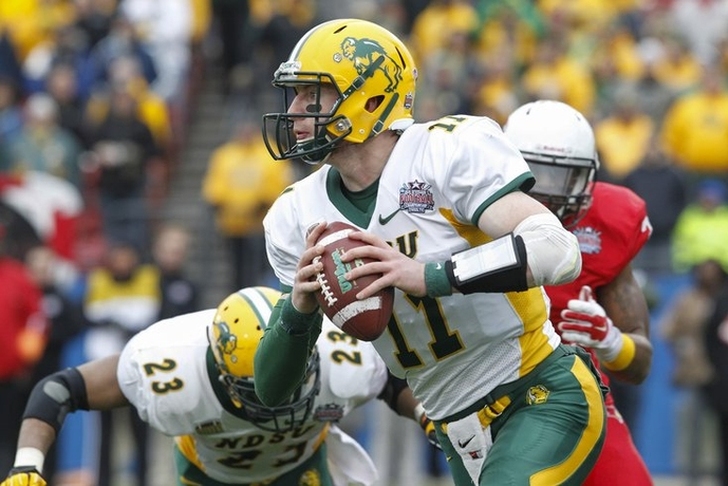 The Tennessee Titans have expressed a willingness to trade the No. 1 overall pick in the NFL Draft - for the right price - and several teams have expressed an interest in acquiring the pick. Many of them have a need for quarterback and are hoping to draft North Dakota State's Carson Wentz, who the Browns are expected to draft with the No. 2 overall pick. Here are the four teams that are trying to trade with the Titans for that top pick:

Philadelphia Eagles
Eagles owner Jeffrey Lurie and head coach Doug Pederson have not been shy about their intentions to draft a quarterback this year, and there's a report that they want to move in position to draft either Wentz or Cal's Jared Goff. Getting the top pick would allow them to have their choice, and they've already worked out a deal with the Titans, sending them DeMarco Murray. With this open line of communication between the two teams, something could easily get done.

San Francisco 49ers
Colin Kaepernick isn't happy in San Francisco and has been looking for a trade. The 49ers have been linked to Cal's Jared Goff with the No. 7 overall pick, but if they have Wentz higher on their board, trading up is a real possibility for them. Poor QB play has essentially derailed San Francisco each of the last two years, and new head coach Chip Kelly wants someone who is "his guy".

Los Angeles Rams
Los Angeles is the dark horse here. Want to make a splashy move to bring excitement to a new city? Trade for the top pick in the draft to get your quarterback of the future - something this team desperately needs. Neither Case Keenum or Nick Foles are the answer, and the Rams have a playoff-ready roster. The quarterback position is the only thing holding them back, so it wouldn't be a surprise to see them try to make a move for the top spot to spark interest and steal headlines in LA.

Cleveland Browns
Cleveland plans to draft Wentz with the No. 2 overall pick, and since they're so high on him, they may trade into the top slot to ensure that no one else can trade up and steal him from them. They also wouldn't have to give up as much since Tennessee would only be moving back one spot.