4 Teams That Should Consider Signing Robert Griffin III This Offseason 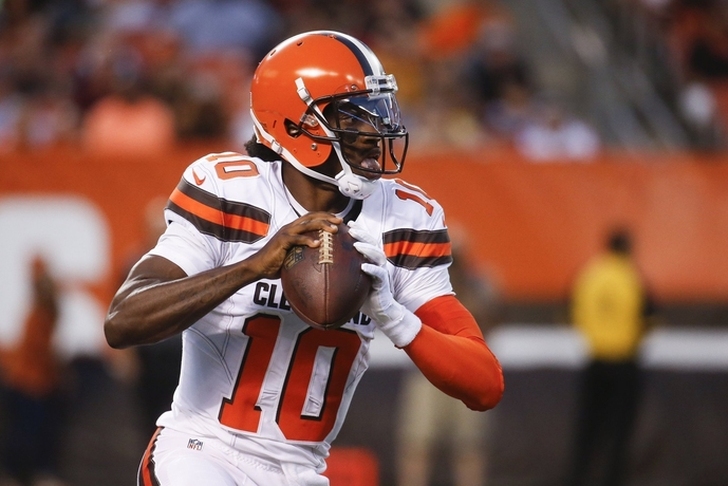 Most of the talk surrounding unsigned free agent quarterbacks has centered around Colin Kaepernick, but Robert Griffin III is also sitting on the open market after spending last year with the Cleveland Browns. The No. 2 overall pick in the 2012 NFL Draft will surely find work again at some point, but where? Here are the four teams most likely to sign him:

4) New Orleans Saints
New Orleans is in the market for a young backup quarterback that will eventually take over for Drew Brees, and would've drafted Deshaun Watson if the Texans didn't trade up ahead of them to draft him. Obviously, they'd like to have a player who is younger and more durable than Griffin, but he is still young enough for them to consider giving him a flyer and seeing how he picks up the offense.

3) Los Angeles Rams
The Rams adding Griffin would make for a great story, given that they're the team that received a king's ransom from Washington in exchange for the Redskins moving up in the draft to get Griffin. The Rams are going with Jared Goff as the starter, but if this year goes anything like his starts last year, they will be looking for another answer. RG3 has more upside than backup Sean Mannion and would likely take over that role. Plus, he has familiarity with Sean McVay from their time together in Washington.

2) Arizona Cardinals
Another team desperately searching for a long-term answer at the position, the Cardinals could very well be willing to give him a shot - especially if Carson Palmer or Drew Stanton gets hurt. Their signing of Blaine Gabbert certainly complicates things for RG3, but Gabbert isn't guaranteed to make the team. Griffin would also be their first option if someone suffered an injury.

1) New York Jets
New York is the most obvious destination for RG3, as they're currently set to go into the season with Josh McCown, Bryce Petty and Christian Hackenberg as their quarterbacks. Griffin took the starting job from McCown in Cleveland last year, and he's probably a better immediate option for the Jets as they try to develop their young signal callers. New York signed McCown to work as a mentor for Petty and Hackenberg, and he can still do that. But, if the Jets want to win games, signing Griffin might be their best chance.