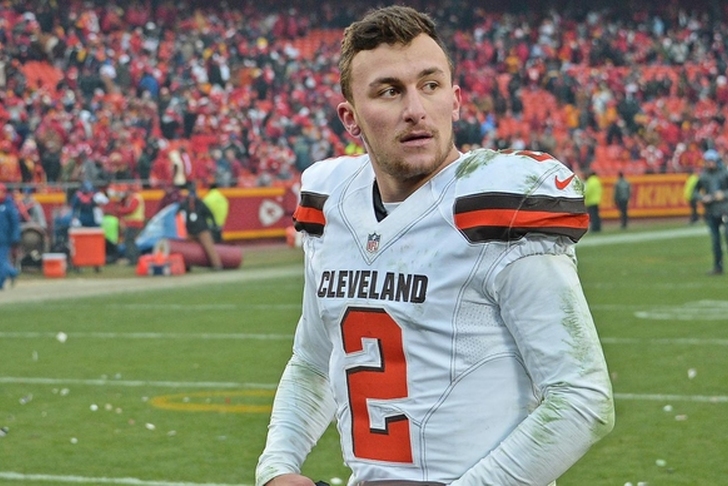 Johnny Manziel has said that he plans to attempt an NFL comeback this offseason after being out of the league for a year, but it's unclear what level of interest teams may have in giving him a chance to prove himself. However, given the lack of capable quarterbacks in the NFL, someone is bound to take a chance on Manziel in the preseason. So, who might that team be? Here are the four most likely candidates.

4) Buffalo Bills
Buffalo is expected to part ways with Tyrod Taylor this offseason, leaving them with an obviously hole under center. Cardale Jones isn't ready to be a starter and E.J. Manuel doesn't belong on the field - and they're unlikely to land Jay Cutler in free agency or trade for Tony Romo. If that happens, the Bills may take the chance on playing Jones and seeing what happens, but they'd need depth. Enter Manziel.

3) Jacksonville Jaguars
The Jaguars are quickly souring on Blake Bortles, and even though Chad Henne is entrenched as the backup, they may want to bring someone else in simply to mix it up. This move could also bring some publicity to the Jaguars, which they may need after several dismal seasons.

2) Houston Texans
We all know about Jerry Jones' obsession with Johnny Manziel and how much Manziel loved the thought of playing in Texas. Manziel may get the chance to play in his home state, just with the Texans instead of the Cowboys. We all know that Houston's quarterback situation is a mess, and Brock Osweiler has proven that he is not the answer. They replaced him with Tom Savage, but he isn't the answer either.

With Bill O'Brien's reputation as a quarterback guru, he could be the most out of Manziel on the field. Worst case, he would challenge Osweiler and let him know that his job isn't safe.

1) San Francisco 49ers
The 49ers are expected to hire Falcons offensive coordinator Kyle Shanahan has their head coach after the Super Bowl, and Shanahan and Manziel seem to have a mutual respect for each other. Manziel says that he's a "big" Kyle Shanahan guy after spending a season with him in Cleveland, and Shanahan only had good things to say about Manziel in June:

"I was with Johnny for eight months, and Johnny is a very good guy," Shanahan said. "Johnny worked as hard for me as anybody. Everything I asked him to do, he did. He was very humble. He did not think he had all the answers. He knew he had to work."

It is plausible that the two could reunite. San Francisco's quarterback situation is in flux for next season as Colin Kaepernick can opt out of his contract and Blaine Gabbert was benched halfway through the season. If there's a team that will gamble on Manziel, San Francisco seems likely.