4 NFL Players Who Would Get Knocked Out By Ronda Rousey 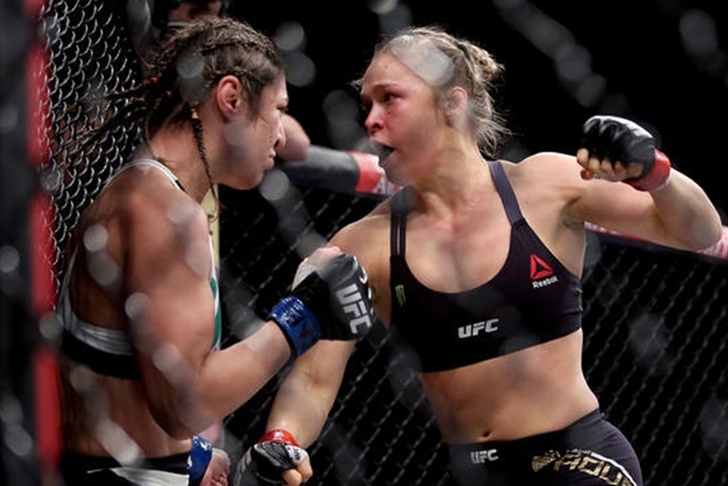 We're pretty sure Ronda Rousey could make us cry just by looking at us with her eyebrow raised, but that's not stopping us from puffing up our chests (and our keyboard-typing fingers) and listing four NFL players that Rousey would knock out 1980s Mike Tyson style.

We're expecting Redskins fans to hurl Molotov cocktails (with pig noses on them) at us for this, but c'mon. RGIII is of the new wave of NFL quarterbacks, content to sulk and toss off cryptic asides about his feelings while Jay Gruden tries his hardest not to clothesline him WWE-style. We were also going to go for an oft-injured joke here, but we're nice people.

We'd call this fight a dead heat if Brady was allowed to have one of his ballboys "inflate" his MMA gloves with brass knuckles and random shards of metal, but UFC officials are pretty good about checking for that stuff. Once the playing field is level, Brady's cries for Giselle Bundchen to "tag in" will go unanswered.

Ever play Mike Tyson's Punchout when you were a kid. Did you know Geno Smith made a cameo, even before he was born?

One of Rousey's punches would knock all 32 NFL kickers down like dominoes if you lined them up for a "group photo." In fact, even if every kicker in the league somehow came together as some weird Power Rangers-style mechakicker, Rousey would cave the kicker monster's head in within three seconds before likely being tried for assault and battery -- sanctioned or not.