4 NFL "Contenders" With No Chance Of Making The Playoffs 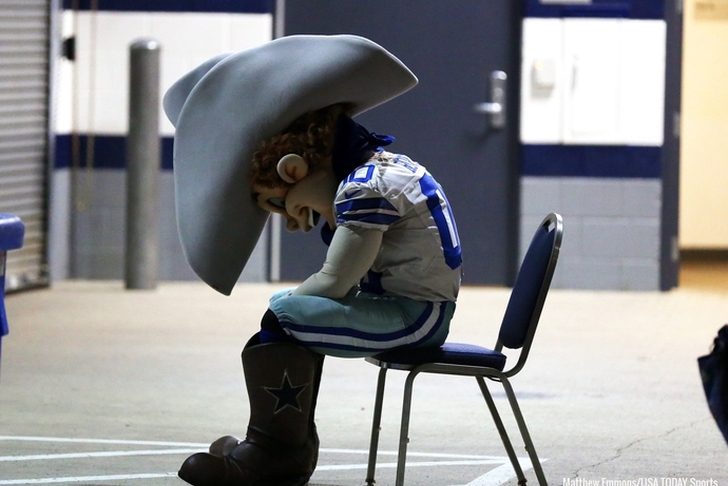 The easiest way to write an article like this would be to pick easy targets like the Jacksonville Jaguars (2-6) and Detroit Lions (1-7) and just list them as the teams we know won't make the playoffs. However, we've decided to expand our net and bring in a little controversy with 4 NFL "Contenders" With No Chance Of Making The Playoffs.

Those who claim that Tony Romo isn't a marquee quarterback haven't been watching the slow-burning dumpster fire that's become the Cowboys' 2015 season. Matt Cassel had his best game in a long time last week, but that's been the outlier in a season marked by D+ level quarterback play from Brandon Weeden/Cassel since Romo went down with an injury back in Week 2. In addition, on the rare occasions that the Cowboys get some mojo going under center, wide receivers forget how to get open, the secondary gets distracted by something shiny on the sidelines or another injury rears its ugly head.

The NFC East is still anyone's game with the vulnerable 5-4 NY Giants leading the pack, but it's time to stop calling this Cowboys team contenders. Even if/when Tony Romo comes back next week, this season's too far gone at 2-6 (and likely to be 2-7) for even him to salvage things.

We're prepared for the hate mail. The Seahawks may be the biggest "reach" of the four teams on this list, but they've done nothing this year on offense to make us believe that they'll separate from the NFC Wild Card pack down the stretch. Marshawn Lynch hasn't been able to break into the second level with consistency all year long (3.6 yards per carry), whether it's due to nagging injuries or not. The passing game is a mirage and continues to be window dressing for the team's run-heavy scheme, which is part and parcel of why the defending NFC champs rank 28th in the NFL with 17.38 points per game.

Nobody is touching the 6-2 Cardinals in the NFC West, and it's looking increasingly likely that either the 6-2 Vikings or 6-2 Packers will take up a wild card spot as consolation for losing the NFC North. That leaves the Falcons (6-3), Seahawks, Eagles (4-4), Rams(4-4) and Saints (4-5) as viable options for the #6 seed. Seattle's defense is elite, but their offense isn't going to do them any favors in close games in November/December.

Ok, maybe this is the biggest stretch. The Colts are a 1/2 game up in an AFC South which looks eerily similar to the carnival of mediocrity that was the NFC South last year. We're not particularly sold on the Texans, but we're less sold on a Colts team that's already mired in chaos once again losing Andrew Luck for multiple games. Matt Hasselbeck has gone 2-0 in relief duty this year, but his next task off the bench comes in Atlanta team that's steaming mad after somehow getting edged by the 49ers this past Sunday.

If Indy falls to 4-6 there, a convincing case can be made that the controversy surrounding head coach Chuck Pagano, GM Ryan Grigson and a number of "unnamed" Colts sources will turn the rest of the season into a three-ring circus. That's enough for JJ Watt to dead lift his entire Texans team and carry them to an AFC South title.

The Steelers now have a tiebreaker in hand over the 4-4 Raiders after a 38-35 win on Sunday, but their window of opportunity at clinching an AFC Wild Card berth may have closed completely after Ben Roethlisberger suffered a left foot sprain in Week 9. Landry Jones isn't ready to help separate this team from the New York Jets (5-3) and (yes) Oakland Raiders of the world, no matter how explosive his surrounding weapons are. And, even if Big Ben comes back this week or very soon, we're getting a quarterback who's been hobbled by both a sprained foot and MCL this year.

Having the 22nd-ranked defense in the league doesn't help matters (374.7), nor does head coach Mike Tomlin's inability to manage the clock. Pittsburgh looks "sexy" as a contender on paper, but that luster is going to go away pretty quick. Book your playoff tickets for the Jets and Raiders, folks. Pittsburgh is primed for a late-season collapse.