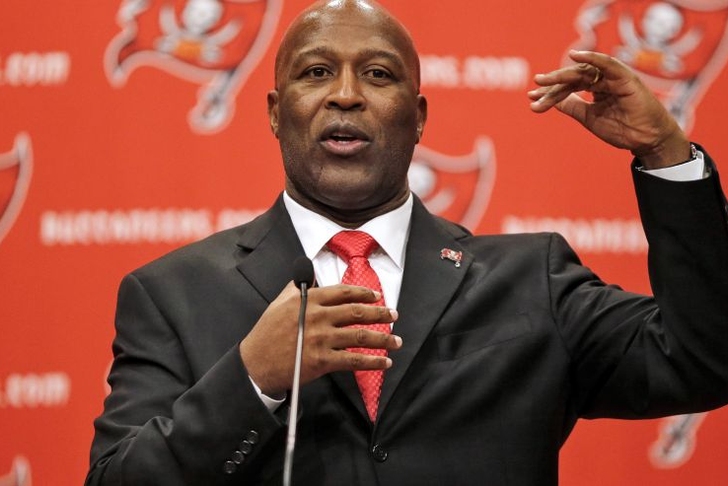 Six NFL teams axed their coaches shortly after the 2014 season came to a close, and the Raiders (who ditched Dennis Allen early in the year) bring the total number of 2014 coaching casualties to seven.

There are a handful of coaches who survived 2014 despite less-than-impressive years, but these guys will all be on a very short leash next season. Here are four NFL coaches who will be starting 2015 on the hot seat...assuming they make it that far.

Bradley is beloved by his players and respected by his peers...but a 7-24 record through two seasons means results have to be coming soon. Bradley's bosses in Jacksonville know he hasn't had much to work with yet, but he'll have to start delivering wins sooner rather than later. If Bradley's team is unable to show improvement in Year 3, his players and fans won't be able to save him.

It doesn't help that Jacksonville owner Shahid Khan has a reputation for blazing through coaches at a breakneck pace - his soccer team, Fulham, has had four different managers since December 2013.

Lovie skated through a disastrous 2014 season on his previous reputation, but he'll be on a much shorter leash next season. At 2-13 heading into the final week of the season, the Bucs are guaranteed to finish 2014 with a worse record than they did in 2013, when a 4-12 record saw Greg Schiano lose his job.

If Lovie can't find a quarterback and find a way to put some points on the board, his tenure in Tampa Bay will be a short one.

Much like Lovie Smith, Whisenhunt was able to escape blame for his team's poor season, but unlike Smith, Whisenhunt has had to deal with an absolute onslaught of injuries. QBs Jake Locker and Zach Mettenberger have both gotten hurt and missed time, and it's hard to get a read on a team's true potential when a good chunk of the roster spends each week on the training table (seriously - check out their injury reports from this season).

Whisenhunt will start 2015 with a clean slate, but if he can't shore up the leaky defense and show some results in the AFC South (motto: at least we aren't the NFL South!), his seat will heat up in a hurry.

Why the asterisk? When your team is owned by Dan Snyder, your seat is always hot. Gruden could win the Super Bowl with a wheelchair-bound RG3, then get fired for saying something about Snyder's tie during the victory parade...so there's a very real chance he doesn't make it to the 2015 season opener, even if Washington wins their season finale against Dallas by 97 points.

Snyder's task this offseason: figure out how to navigate Washington's QB controversy without losing his job, then turn one of the league's leakiest defenses (28th out of 32 teams in points per game allowed) into a unit that can hang in the high-scoring NFC East. Sounds like a piece of cake.