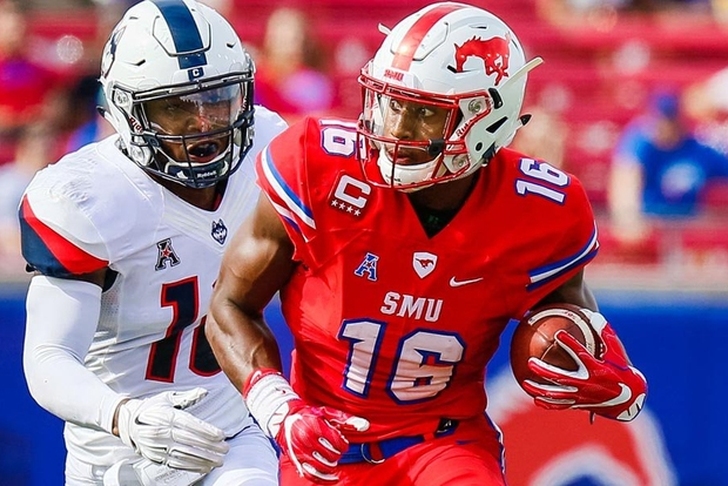 Had SMU wide receiver Courtland Sutton declared for the NFL Draft last season, he likely would have been a Day 2 pick. Instead, he came back to school and is now considered a first-round pick. Size (6-foot-4, 216 lbs.), speed, and production (68 catches, 1,085 yards, 12 touchdowns) are all there for Sutton, but the questions with him come from playing against Group of 5 competition.

Where will he land? Here are the three teams that are the most likely to draft Sutton:

1.) Dallas Cowboys
The Cowboys rumors are swirling around who the Dallas Cowboys may select in the 2018 NFL Draft. A position of much discussion this offseason has been the wide receiver position.  Despite signing wide receiver Allen Hurns, the Cowboys are still looking to improve their wide receiver corps. There are plenty of question marks around Dez Bryant's future with the Cowboys and if he is still a legit WR1 in the NFL. If Sutton is sitting on the board at No.19, he may be too hard to pass for the Cowboys.

2.) Baltimore Ravens
It's no secret that Baltimore's offense has really lacked playmakers since they won the Super Bowl and they've made it a priority to bring in more help around Joe Flacco. The Ravens have already brought in free agents Michael Crabtree and John Brown but need more top-end depth and a long-term answer at the position. As such, expected them to target Sutton if he's still on the board at No. 16.

3.) Carolina Panthers
There's also the possibility that Sutton falls all the way to the Panthers at No. 24, and if he does, Carolina would be more than happy to snatch him up. They need to find a starting-caliber wide receiver to replace Kelvin Benjamin and give Cam Newton another weapon to help take his offense to another level. They already have Devin Funchess locked into one starting spot and Curtis Samuel in the slot but would like to add a young talented player with wide receiver one upside - which is exactly what Sutton is.