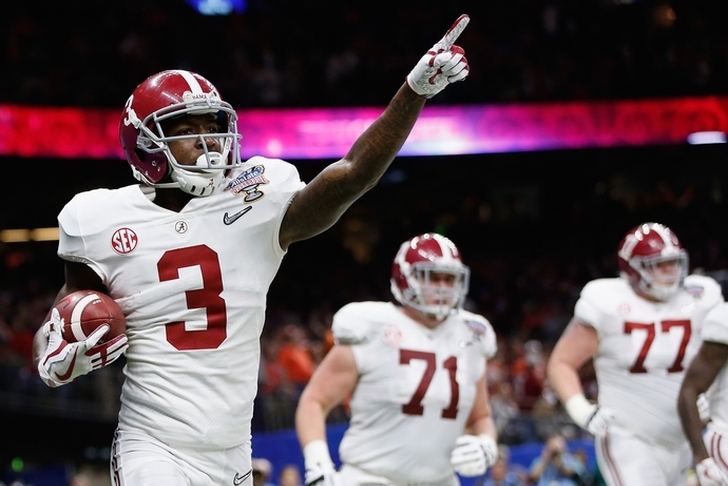 Alabama Crimson Tide wide receiver Calvin Ridley is the top wide receiver taken in the NFL Draft but is projected to be taken anywhere from the top 10 to the last few picks in the first round. Why the variance? Teams have questions about his decreasing production (though that can be credited to Alabama's run-heavy offense), his size, and the fact that he'll turn 24 during his rookie season.

Where will he land? Here are the three teams that are the most likely to draft him:

1) Baltimore Ravens
It's no secret that Baltimore's offense has really lacked playmakers since they won the Super Bowl and they've made it a priority to bring in more help around Joe Flacco. The Ravens have already brought in free agents Michael Crabtree and John Brown but need more top-end depth and a long-term answer at the position. As such, expected them to take Ridley if he's still on the board at No. 16.

2) San Francisco 49ers
San Francisco could very easily take Minkah Fitzpatrick or Quenton Nelson if they're available, but wide receiver remains a big need for the 49ers and Ridley makes sense if he's on the board. While Ridley is not an elite athlete, he's an incredible route-runner and I still think he's the top WR in the draft. The 49ers need to give Jimmy Garoppolo weapons and Ridley would be a very reliable one from day one.

3) Carolina Panthers
There's also the possibility that Ridley falls all the way to the Panthers at No. 24, and if he does, Carolina would be more than happy to snatch him up. They need to find a starting-caliber wide receiver to replace Kelvin Benjamin and give Cam Newton another weapon to help take his offense to another level. They already have Devin Funchess locked into one starting spot and Curtis Samuel in the slot but would like to add a quicker, all-around wideout to the group - which is exactly who Ridley is.