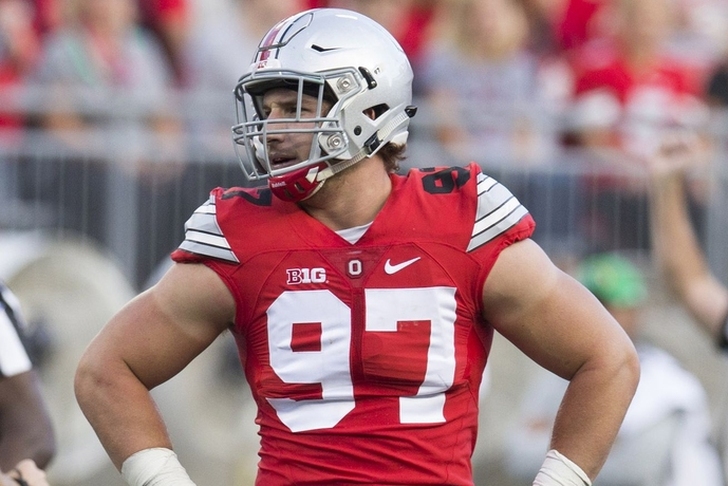 Joey Bosa, who at one point was the frontrunner to go No. 1 overall in the NFL Draft, is now in danger of taking a tumble out of the elite group of prospects in this year's class. More than likely, though, the Ohio State star will still be among the top handful of players taken on Thursday night. Who are the teams most likely to pick him?

3) Cleveland Browns
Bosa falling all the way to No. 8 might be a pipe dream for the Browns, but if the defensive end somehow gets passed up by the next two teams on this list -- as well as the Baltimore Ravens at No. 7 -- you better believe Cleveland will rush to the podium to make this selection. While Bosa would be best suited playing in a 4-3 defense, Buckeyes assistant Luke Fickell could also see Bosa thriving in a 3-4. There would be a learning curve, to be sure, but his overall skill set would be an absolute steal for the Browns this late.

2) Dallas Cowboys
The Cowboys could add to their secondary by taking Florida State's Jalen Ramsey, or go with the sexy pick in Ezekiel Elliott, but the pass rush should be the team's top concern after losing both DeMarcus Lawrence and Randy Gregory to suspension. While Bosa may not have the upside to become a franchise-changing player, he could immediately line up on the left side and push for double-digit sacks.

1) Jacksonville Jaguars
If the Cowboys pass on Bosa, Jacksonville will very likely become Bosa's next home. Considering their porous 2015 secondary, Ramsey will also likely be high on their list, but Bosa is the much safer play given his consistent dominance with the Buckeyes. Lining him up alongside Malik Jackson and 2015 first-rounder Dante Fowler would bring the Jags' d-line to the next level.