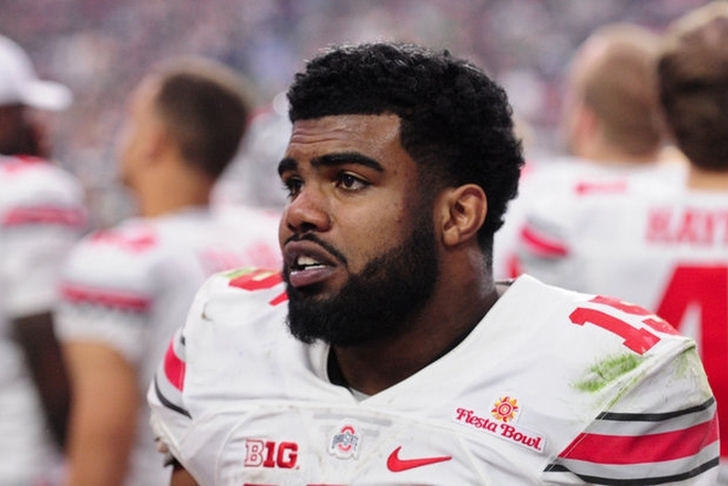 Ezekiel Elliott is the only running back projected to go in the first-round of the 2016 NFL Draft, but where exactly he ends up will remain a mystery until Thursday night. With that said, there are a few NFL teams that have emerged as frontrunners for the Ohio State star. Here they are, in order of likelihood.

3) Dallas Cowboys
While most experts see the Cowboys drafting for defense with the No. 4 overall pick, there's a chance they go for the sexy pick in Elliott. Stephen and Jerry Jones won't confirm or deny serious interest in the Buckeyes back, but they seem to be high on his potential. Darren McFadden had a nice year for the Cowboys in 2015, and Alfred Morris and Lance Dunbar are also on the roster, but the chance to grab a franchise-changing RB might be too good to pass up.

2) Chicago Bears
With Matt Forte gone, the Bears could use another young talent to pair with Jeremy Langford in their backfield. That could very well be Elliott, who would be reuniting with his former Ohio State running backs coach Stan Drayton in a move to Chicago. Elliott himself says that the team "in love with" him, and he's probably not too far off given John Fox's respect for hard-nosed runners. A lot of mocks see the Bears taking outside linebacker Leonard Floyd at No. 11, but don't be surprised if Elliott ends up being their man.

1) Miami Dolphins
If Elliott falls to No. 13, don't expect the Dolphins to pass up on him. With Lamar Miller gone, Miami is in desperate need of a No. 1 back, and the team is reported to have strong interest in the Big Ten standout. Their intrigue even has reports coming out of the team trading back up for Elliott. While I wouldn't go quite that far, his upside is more than worth the Fins' pick midway through the first round.