3 Teams Likely To Trade Up To Draft Marcus Mariota 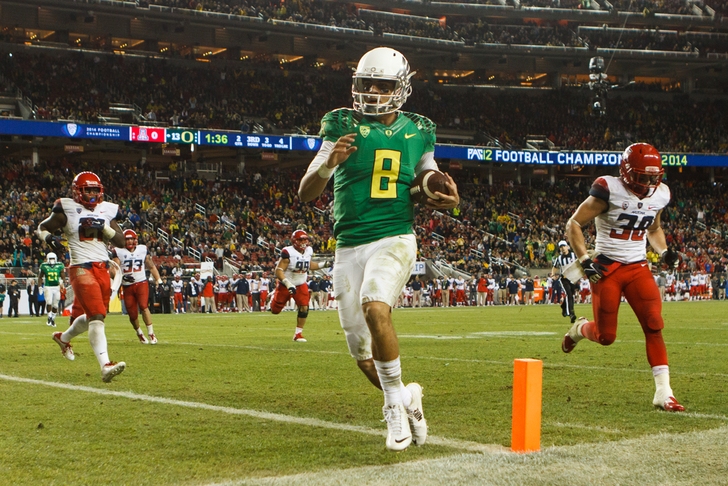 The Tampa Bay Buccaneers seem set on drafting Florida State's Jameis Winston with the first overall pick, but things aren't quite as clear for Oregon's Marcus Mariota. He's projected to go anywhere from No. 2 to No. 12 overall, and several other teams may trade up to draft him. Here are the teams that are the most likely to make such a move: Eagles head coach Chip Kelly hasn’t been shy about how much he loves Marcus Mariota as a quarterback, and he wants to do whatever it takes to get him. Philadelphia holds the No. 20 overall pick in the draft, so they'll have to give up several future first-round picks to move up - but it wouldn't be surprising to see Kelly pull the trigger to bring in his favorite quarterback.

The Browns are the other team that really covet Mariota, but they’re also out of position to draft him. They hold the No. 12 and No. 19 overall picks, and would package both of those picks to move into the top five to draft him. Cleveland has been in talks to acquire Sam Bradford from the Eagles, and if that deal gets done, it will take them out of the running for Mariota. The Chicago Bears have recently expressed interest in trading current starter Jay Cutler and drafting Mariota. They're in range to draft him with the No. 7 overall pick, but many believe that the New York Jets will draft him with the No. 6 pick. If the Bears like him enough, they'll have to trade into the top three or five to ensure they get him.