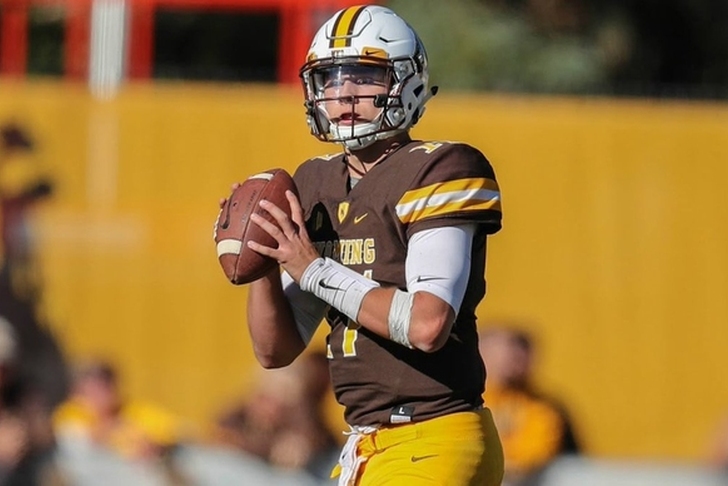 The order is based on the 2018 Super Bowl odds, so yell at Vegas, not me, about the order. And yes, there are several teams that have odds far too low and will likely be drafting much higher.

This is really a look at what the future needs for teams could be and what prospects could be first round picks. Of course, there will be a ton of changes in both order and who goes where. That's just the nature of the NFL Draft. Unlike last year, the 2018 Draft should have quality QBs and OTs. With that out of the way, let's get to the picks.

1. San Francisco 49ers: Josh Allen, QB, Wyoming
There's always projection involved here and that's what Allen at No. 1 is. But he has all the tools teams want in their QB. If he shows improved accuracy, ideally upwards of 65 percent, he'll be a sure-first round pick. He considered coming out, and might have gone very early, but heading back for another year was a smart move. Taking Allen gives the 49ers their franchise QB, assuming they don't get Kirk Cousins.

2. Cleveland Browns: Derwin James, S, Florida Sate
Jabrill Peppers is already in Cleveland, but here's an even better defensive back. The FSU defense really struggled when James went down, but he should be better next year. If he stays healthy, he could very well be viewed as a better prospect than Jalen Ramsey.

3. New York Jets: Sam Darnold, QB, USC
If the Jets are drafting this high, it's time to take advantage of what is shaping up to be a very good QB draft class (way better than this year). Darnold is very much a hyped prospect, but that will slow down once people realize is release is painfully slow. He's still a good prospect, but he's not the second coming just yet.

4. Chicago Bears: Minkah Fitzpatrick, CB, Alabama
I thought the Bears would take a CB this year, but they did not. They need more impact defensive players and that's Fitzpatrick. Prince Amukamara is only on a one-year deal and Kyle Fuller is on iffy ground with the team after not playing this year. The team also declined his fifth year option Other options could be another edge rusher or an OT.

5. Los Angeles Rams: Arden Key, EDGE, LSU
The Rams need more pass rushers for Wade Phillips' defense. Key is the top one, although briefly stepping away from football will cause concerns. If he plays well, Key should be the top edge rusher taken.

6. Buffalo Bills: Christian Wilkins, DT, Clemson
If the Bills are this bad, QB could be an option. But instead, I'll give them the top DT in the class in Wilkins. He's primed for another big year for Clemson's defense. Plus, Kyle Williams is an aging free agent.

7. New Orleans Saints: Sam Hubbard, DE, Ohio State
Much like Buffalo, QB is an option here (and it is for several of these top picks). Instead, the Saints take of their biggest immediate need after ignoring it for too long this year. Hubbard needs to take a big step forward, but he could have a breakout year that drives him into the Top 10.

8. Los Angeles Chargers: Harold Landry, EDGE, Boston College
Had he turned pro, I think Landry would have been a late first or early second round pick. Instead, he headed back for another year and could benefit in a lesser class. He'd be a good fit as a LEO if Melvin Ingram is lost. QB is also an option here.

9. Jacksonville Jaguars: Josh Rosen, QB, UCLA
If Rosen takes a step forward, he can reach his "Chosen Rosen" potential that made him so coveted in high school. He's not there yet and if he doesn't take that step, he could be in for a Christian Hackenberg or Brad Kaaya-type fall. He has the pocket passer ability teams covet and he'd be a good fit in Jacksonville.

10. Washington Redskins: Christian Kirk, WR, Texas A&M
This assumes that the Redskins keep Kirk Cousins. If not, all bets are off. Instead, I'll give them a DeSean Jackson replacement in Kirk, the likely No. 1 WR off the board.

11. Cincinnati Bengals: Connor Williams, OT, Texas
Williams could easily go before this in what is shaping up to be a pretty darn good OT class. Williams has been the Texas left tackle for two years and I wouldn't be surprised if he goes Top 5 next year if the needs break down properly. The Bengals drafting this high means the offensive line probably didn't play very well.

12. Tennessee Titans: Tyquan Lewis, EDGE, Ohio State
I know, this seems way too low for the Titans. But if they are this high, I suspect the pass rush might be to blame. Here's the other OSU edge rusher in this mock, and Lewis could go off the board before Hubbard.

13. Detroit Lions: Derrius Guice, RB, LSU
Yeah, so the other LSU RB is pretty darn good too. I don't think he's as good as Leonard Fournette, but Guice is really good and a bit quicker. He'd give the Lions a true feature back.

14. Philadelphia Eagles: Saquon Barkley, RB, Penn State
I actually like Barkley more than Guice, but I think he might go off the board second. He'd be a great fit for Philly, who needs a true feature back. Barkley is going to make a great NFL runner and I think he'll be in the Heisman race.

15. Cleveland Browns (via Houston Texans): Mike McGlinchey, OT, Notre Dame
The Browns find their Joe Thomas replacement. McGlinchey could have gone in round one this year had he turned pro and I suspect I've got both top OTs too low. It'd be cool to see Notre Dame's LT and OT reunited.

17. Carolina Panthers: Calvin Ridley, WR, Alabama
Kelvin Benjamin has apparently shown up to workouts overweight and that's not going to help him long-term. The Panthers said they'd pick up his fifth-year option, but here's insurance if they don't or if he struggles. Ridley was overlooked in Alabama's run-first offense, but the kid can play.

18. Indianapolis Colts: Malik Jefferson, LB, Texas
Jefferson has not reached his potential yet at Texas and has actually underachieved. If Tom Herman can get him to play near it, Jefferson will be a first rounder. He'd be a great fit with the Colts.

19. Baltimore Ravens: Courtland Sutton, WR, SMU
Mike Wallace will be a free agent after next year and WR is a major need. Breshad Perriman has some ability, but he can't stay healthy. Here's an underrated WR for Joe Flacco.

20. Tampa Bay Buccaneers: Orlando Brown, OT, Oklahoma
Brown is a massive prospect and although he might be better off on the right side, the Bucs could try him on the left. If Donovan Smith doesn't improve in a big way, it's time to find

21. Arizona Cardinals: Mason Rudolph, QB, Oklahoma State
I'm not sure Rudolph goes in round one, but I think he could sneak into the latter part to a team like Arizona. Or maybe a massive year pushes him even higher. He fits what Bruce Arians wants in a QB and the Cardinals need to find a replacement for Carson Palmer soon. There are only four QBs in the first round for me and although I like Luke Falk and a few others, I'm not quite ready to put them in round one. Lamar Jackson is not a first round QB prospect at all.

22. Minnesota Vikings: Da'Shawn Hand, DT, Alabama
I'm really excited to see Hand get his chance to shine at Alabama. He could have a huge year for the Crimson Tide, pushing him into round one. The Vikings added Jaleel Johnson, but more DT help is needed for the long-term.

24. New York Giants: Mitch Hyatt, OT, Clemson
I'm really surprised the Giants didn't add an OT early this year. If Ereck Flowers struggles again, the Giants will have to. Hyatt is another quality tackle option in this year's class.

25. Denver Broncos: Cameron Smith, ILB, USC
Todd Davis is a pending free agent and he can be upgraded anyway. Smith played great last year for USC and this might end up being too low for Smith if he has another big year.

26. Atlanta Falcons: Lowell Lotulelei, DT, Utah
Dontari Poe is only in Atlanta for one year under his current contract. Here's a potential replacement. Lotulelei would have been a Day 2 pick, I think, had he gone pro this year and I like this fit.

27. Seattle Seahawks: Martinas Rankin, OT, Mississippi State
Until Seattle figures out Russell Wilson will get killed behind their makeshift offensive line, I'll keep mocking them offensive lineman. Rankin is the top one left.

28. Oakland Raiders: Kendall Joseph, LB, Clemson
This might be a reach, given Joseph's not great size, but Joseph has talent. Joseph, not Ben Boulware, was the best LB on Clemson last year.  And the Raiders really need

30. Green Bay Packers: Bradley Chubb, DE, N.C.State
I don't know if Vince Biegel or Kyler Fackrell are long-term ideal options and the Packers love taking more OLB. Chubb, is a name you'll hear more as the season goes on. I think he goes before the more well-known Nick Chubb.

31. Dallas Cowboys: Jordan Whitehead, S, Pittsburgh
The Cowboys seriously might not be done getting more secondary help. If Jeff Heath / Kavon Frazier / Xavier Woods don't get the job done this year, the Cowboys could add a player like Whitehead in round one. He's another versatile defensive back, something the Cowboys like.

32. New England Patriots: Adonis Alexander, CB, Virginia Tech
The Patriots might lose Malcolm Butler next offseason. Alexander has amazing size, which could appeal to the Pats. With the NFL moving to bigger corners, Alexander is a potential first rounder.