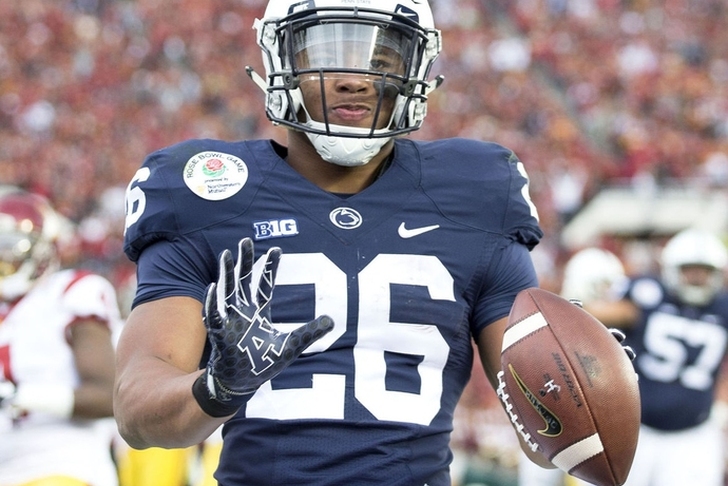 The 2017 NFL season has completed has completed its first quarter of the year, which means it's time for a 2018 NFL Mock Draft. Sure, the next draft is months away and prospect evaluations will continue to change from now until after the college football season ends, but it's never too early to take a look at the top prospects in the 2018 NFL draft.

The order is based on the current NFL Draft order, so don't @ me about the order. And yes, there are several teams that will end up finishing much higher or lower.

This is really a look at what the future needs for teams could be and what prospects could be first round picks. Of course, there will be a ton of changes in both order and where prospects end up being drafted. That's just the nature of the NFL Draft. Shameless bragging as well here, I was tied for 12th in Mock Draft Accuracy last year. With that in mind, let's get to the picks.

1. Cleveland Browns: Sam Darnold, QB, USC
If the Browns end up with the first overall pick, that means the play of Deshone Kizer probably hasn't improved much. That means the Browns could finally spend a first rounder on a QB (or they'll trade it away and get another haul). The hype around Darnold has settled and it's more in-line with what I had him as entering the year. He's struggling with turnovers and his release remains too long. But the play-making is there, he's pretty accurate and scouts are still high on him. There's some buzz Darnold could return to USC for another year, but as of now, he's the top QB in the draft.

2. San Francisco 49ers: Josh Rosen, QB, UCLA
After missing much of last year with a shoulder injury, Rosen has shown the tools that earned him the nickname "Chosen Rosen." A classic pocket passer, Rosen's raw physical skill set is among the best of any QB this year. Factor in the production he's had, and it's easy to see why he could be a Top 5 pick. His accuracy has improved this year, although teams will want to be sure he really has increased his maturity.

3. New York Giants: Saquon Barkley, RB, PSU
The Giants still need OL help, but the front office might not be able to pass on the star RB from Penn State. Barkley has been unreal this year and is a better prospect (as things stand now) than both Leonard Fournette and Ezekiel Elliott. Barkley can help solve the Giants' running game issues, although they'll still need to be better up front. Barkley could end up being the best prospect in this year's class.

4. Los Angeles Chargers: Derwin James, S, FSU
I love Derwin James. A versatile playmaker in the secondary, James can play any DB spot. I think he'd be a perfect safety for the Chargers, who need an impact guy in the backend. Health (James missed most of last year), might be his biggest red flag.

5. Indianapolis Colts: Connor Williams, OT, Texas
The Colts could target an edge rusher, but it's a better idea to protect their franchise QB. Williams is currently dealing with an injury that could hurt his stock, but he profiles as a true left tackle. Williams struggled a bit early this year, but it was also his third system in as many years. Had he been draft eligible last year, he would have been my highest graded OT.

6. Cincinnati Bengals: Orlando Brown, OT, Oklahoma
Brown is a massive human being: 8-foot-8, 360-pounds. That says "right tackle," but he's actually very good in pass protection. He'll got a shot at left tackle and if he convinces teams he has the ability to handle speed, this might be too low for him.

7. Chicago Bears: Arden Key, EDGE, LSU
Imagine Leonard Floyd and Arden Key together. That's one hell of a 1-2 punch at OLB and the Bears badly need more impact defensive players. Key is the best one left, although his short break from football this year will worry some teams.

8. Miami Dolphins: Harold Landry, DE, Boston College
The Dolphins could go a few routes here, with guard, DE and CB among them. Charles Harris is one long-term piece, but this is an aging DE core. Landry has talent and was a potential first rounder had he gone pro last year. He'd make for a strong partner with Harris.

9. Baltimore Ravens: Christian Wilkins, DT, Clemson
The Ravens don't badly need another DL, but Wilkins has Jonathan Allen-like ability. He could go higher than this, so I like the value. WR is also an area the Ravens will monitor, but it might be a bit early for a WR right now. Courtland Sutton would be a great fit.

Check out the NFL Daily Podcast on iTunes and Google Play

10. Arizona Cardinals: Josh Allen, QB, Wyoming
The Cardinals are looking for a Carson Palmer heir and Allen is a classic Bruce Arians QB. He's got all the raw tools (size, arm, athleticism), but they're very raw. He's had issues this year, but some team will fall in love with his upside. The Cardinals, who surely would have taken Patrick Mahome had he fallen to them, fit the bill.

12. Cleveland Browns (from Houston Texans): Minkah Fitzpatrick, DB, Alabama
Joe Haden is gone, so here's a potential replacement. Fitzpatrick could easily go before this, but falls just a bit. He can play both CB and S and that versatility could easily get him in the top 10.

13. Jacksonville Jaguars: Lamar Jackson, QB, Louisville
The bias against some mobile QBs (i.e. claims Jackson has to move to WR or RB) could hurt Jackson. But he has the arm and pure upside to make it as a QB. I'm worried about his accuracy (he also struggled against Clemson), but he's worth taking a shot on. A team like Jacksonville should be willing to take the risk that he's more Mike Vick and less Vince Young (from a success standpoint).

14. Dallas Cowboys: Bradley Chubb, DE, NC State
The Cowboys are going to keep throwing picks at their front four. DeMarcus Lawrence has been great, but he's also a free agent. Taco Charlton was a first round pick and David Irving has upside, but more is more. Chubb has some serious ability and could help instantly. Safety and OG could be options here.

15. New York Jets: Mason Rudolph, QB, Oklahoma State
The Jets are probably supposed to be tanking, but here they are at 2-2. They miss out on the top QBs, so they could elect to reach for a guy like Rudolph. He's productive, but will need to adapt to the NFL. I've got some worries about his arm strength, but the Jets need an answer here and might take the risk.

16. New Orleans Saints: Sam Hubbard, DE, Ohio State
QB is an option here, if Drew Brees leaves. But a DE across from Cam Jordan is the biggest need on the roster and I'm high on Sam Hubbard. He still needs to produce more, but the ability is there on what is a loaded Ohio State DL. Unfortunately for the Saints, it's not looking like as deep of an EDGE class.

17. Oakland Raiders: Malik Jefferson, LB, Texas
Please Oakland: spend some real draft capital on a LB and don't be like the Giants. Jefferson is finally starting to live to his potential as a dynamic LB. He'd fill a huge hole in Oakland.

18. Minnesota Vikings: Tarvarus McFadden, CB, FSU
Trae Waynes has issues and is trending toward bust status. Terence Newman can't play forever, so it's time for the Vikings to add another young option. McFadden could go off the board before this.

19. Washington Redskins: Christian Kirk, WR, Texas A&M
Josh Doctson is coming along slowly, TP might not be back.
The Redskins' pick will be heavily impacted by free agency, with notable players who could leave at WR, LB and QB. The Redskins are in the market either way for a new DeSean Jackson-type WR, and Kirk can be that player. He's got game-breaking ability.

20. Tampa Bay Buccaneers: Mike McGlinchy, OT, Notre Dame
I’m a bit worried about his ability to hold up against speed, which means McGlinchey might be destined for a RT role. But the Bucs could take a shot on him at LT, since Donovan Smith is not the answer.

21. Tennessee Titans: Jaire Alexander, CB, Louisville
It's not a great year for CBs or EDGE, but the Titans need some help there if recent play is any indication. Adoree' Jackson was a first rounder last year, but more corners won't hurt. Alexander is the top of the CB/EDGE players left.

23. Los Angeles Rams: Trey Adams, OT, Washington
Andrew Whitworth won’t be here forever.  EDGE and CB are perhaps bigger needs, but there's better value here in what could be a deep OT class. Adams can start at RT and later shift to LT.

Check out the College Football Podcast on iTunes and Google Play

24. Pittsburgh Steelers: Tremaine Edmunds, LB, Virginia Tech
This kid has really impressed me this year, racking up TFLs and tackles. He's taller than many non-rushing LBs, but I think he'd be a nice partner for Ryan Shazier.

25. Philadelphia Eagles: Derrius Guice, RB, LSU
Guice would give Carson Wentz the RB help he needs. Wendell Smallwood is not a 3-down back. While Guice is no Barkley, he's a pretty good player. Hopefully, the Eagles use him right.

26. Detroit Lions: Maurice Hurst, DT, Michigan
The Lions often give me issues with mock drafts and that's the case again this year. They do need another DT to pair long-term with A’Shawn Robinson. Hurst, who hasn't made a ton of plays this year, still has talent is and is a better fit than a Da'Ron Payne or Vita Vea.

27. Carolina Panthers: Martinas Rankin, OT, Mississippi State
Matt Kalil is not the answer; he’s bad. For the sake of Cam Newton, get another OL. Rankin has looked solid this year and could rise.

28. Denver Broncos: Vita Vea, NG, Washington
Here's a true run-stuffer. Domata Peko is old and can be upgraded anyway. Vea might only be a two-down player, but he'll be a good one.

29. Green Bay Packers: Courtland Sutton, WR, SMU
Allow me to explain. Davante Adams is free agent and we've seen the Packers let guys like James Jones and Greg Jennings leave. Jordy Nelson is aging and the depth is iffy, unless you believe in Geronimo Allison and some others. So adding a player like Sutton, who could go way earlier than this, does make some sense. The value alone is worth it. He’s a big-bodied outside WR the scouts love and this will probably be too low for him.

30. Buffalo Bills: Calvin Ridley, WR, Alabama
I ended up light on WRs, leaving out guys like EQ St. Brown & James Washington. So apologies to them. But Ridley found his way in, despite being older than most WRs coming out (he'll turn 24 late in his rookie year). But he's pro-ready and gives the Bills another needed weapon at WR.

31. Atlanta Falcons: Marcus Allen, S, PSU
A great fit with Keanu Neal and an upgrade over Ricardo Allen. I like Allen quite a bit in a safety class that should have some solid Day 1 and Day 2 prospects.

32. Buffalo Bills (from Kansas City Chiefs): Dorance Armstrong, DE, Kansas
He's been quiet this year, but last year Armstrong racked 20 TFLs and 10 sacks. I like his ability, so hopefully we see more 2015 Armstrong soon. A Lawson/Armstrong tandem could be a potent one.