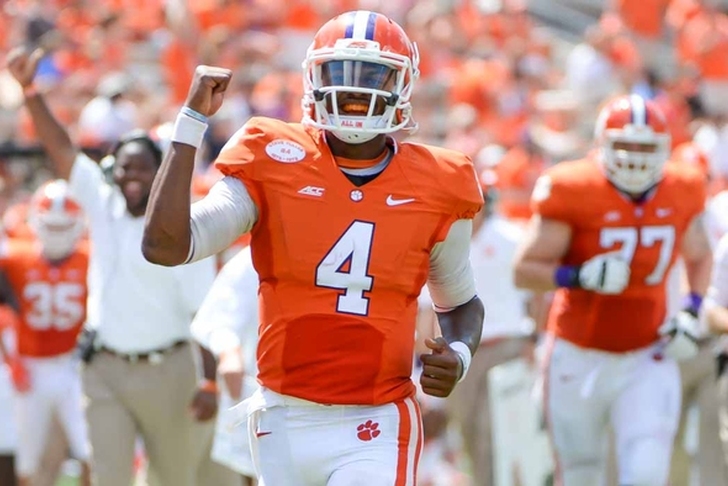 The order is based on the 2017 Super Bowl odds, so yell at Vegas, not me, about the order. And yes, there are several teams that have odds far too low and will likely be drafting much higher. But this is really more of a look at what the future needs for teams could be and what prospects could be first round picks. With that out of the way, let's get to the picks.

1. Cleveland Browns: Deshaun Watson, QB, Clemson
There are two talented QBs that could go early next year, and Watson is one of them. He's a a dynamic QB, who can run and throw. He needs to develop more as a passer, but he could become a taller version of Russell Wilson.

2. San Diego Chargers: Jabrill Peppers, DB, Michigan
The Chargers passed on Jalen Ramsey this year, but could another talented defensive back next year. Peppers can play any secondary position and will be a playmaker in the NFL. He's just a redshirt sophomore, but will be a first rounder if he comes out early. There's a decent change Peppers will stay at least another year.

3. Jacksonville Jaguars: Cam Robinson, OT, Alabama
Luke Joeckel has not worked out and he'll be a free agent. Jermey Parnell is better as a backup and there's no guarantee Kelvin Beachum will play longer than a year for Jacksonville. Robinson is a legit LT prospect and he'd be a big boost for a team on the rise.

4. San Francisco 49ers: Brad Kaaya, QB, Miami (FL)
I'm expecting a big year from Kaaya under Mark Richt. It's a terrible QB class after these Kaaya and Watson (at the moment), and if the 49ers are drafting this high, it means the QB situation is a still an issue. Kaaya could be the first QB drafted next year.

5. Tennessee Titans: Adoree' Jackson, CB, USC
Jackson is crazy fast. He's a gifted athlete that plays some WR for USC. His NFL future is at CB, something the Titans really need. He might not go this high, but teams will fall in love with his athletic ability.

6. Detroit Lions: Jalen Tabor, CB, Florida
Another CB, a position the Lions have ignored for too long. Darius Slay has played well, but he's a free agent and the team could use another starter anyway.

7. Cleveland Browns (via Philadelphia Eagles): Myles Garrett, DE, Texas A&M
If the draft actually breaks down this way and the Browns get a QB and Garrett, they'll have arguably two of the best players from the 2017 class. Garrett is a gifted pass rusher and could very well be the top player in next year's class. He's that good and this is probably too low for him.

8. Tampa Bay Buccaneers: Roderick Johnson, OT, Florida State
Another local player for the Bucs, who took a few Florida players this year. Johnson fills a major need, as the Bucs need to do a better job of protecting Jameis Winston.

9. New Orleans Saints: Da'Shawn Hand, DL, Alabama
Just pencil in the top defensive player on the board for the Saints next year. They have needs at basically every spot but safety. They took Sheldon Rankins in the first last year, but he and Cam Jordan are the only long-term locks at DL for the Saints.

10. Miami Dolphins: Leonard Fournette, RB, LSU
The Dolphins missed out on Ezekiel Elliott this year, but they might land an even better player next season. Fournette could be a Top 3 pick, because he's the rare Adrian Peterson-type RB. Hopefully he stays healthy.

13. Washington Redskins: Ethan Pocic, OG, LSU
The Redskins will likely target line help next year. This is early for Pocic, but he's a good run blocker.

14. Chicago Bears: Zach Banner, OT, USC
The Bears really need some tackle help. He might be more of a RT than LT, but he has intriguing size. He's 6-foot-9, 345-pounds.

15. Buffalo Bills: Malachi Dupre, WR, LSU
Dupre has plenty of talent, but doesn't get much of a chance to show it because LSU can't throw the ball (see Odell Beckham and Jarvis Landry). The Bills need a No. 2 to pair with Sammy Watkins and Dupre is a great one.

17. Houston Texans: Raekwon McMillan, ILB, OSU
Brian Cushing is on the decline. McMillan can replace Cushing sooner rather than later, and contribute right away on passing downs.

18. New York Giants: Jalen Reeves-Maybin, LB, Tennessee
Every year, we talk about how the Giants need LB help. And every year, they neglect the spot early in the draft. Maybe this will be the year it finally changes.

19. Oakland Raiders: Nick Chubb, RB, Georgia
The Raiders wanted Elliott this year, but he didn't fall to them. Chubb is a talented player and if he returns from his knee injury, he'll be worthy of a first round pick.

20. Baltimore Ravens: Desmond King, CB, Iowa
The Ravens need some CB help, and King could be a Top 15 or even Top 10 selection.

21. Kansas City Chiefs: Jamaal Adams, S, LSU
This could be far too low for Adams, who is a very talented player. The Chiefs have Eric Berry, but need another safety to pair with him for the long-term.

22. Indianapolis Colts: Charles Harris, OLB, Missouri
The Colts needed pass rushing help entering this year and it's only going to get worse. Three of their best OLBs are free agents. Harris can get to the QB and that's something the Colts badly need.

23. Minnesota Vikings: David Sharpe, OT, Florida
The Vikings have three tackles who will be free agents next year. They'll likely bring one or two back, but taking a tackle early still makes sense. This might be a bit early for Sharpe.

24. Dallas Cowboys: Tre'Davious White, CB, LSU
White might have been a first rounder had he gone pro last year, and this could end up being too low. Brandon Carr is aging and former LSU CB Morris Claiborne is on a one-year deal.

25. Arizona Cardinals: Mike Williams, WR, Clemson
Williams had a scary neck injury last year, and that could be an issue going forward. If he checks out medically, he'll be a first rounder. He's a gifted WR. The Cardinals could lose one or both of Michael Floyd and Larry Fitzgerald. Both are free agents next year.

26. Cincinnati Bengals: Jonathan Allen, DE, Alabama
Allen had 12 sacks last season and another strong year could push him way higher than this. The Bengals don't have many needs, but DE depth is one of them. Margus Hunt has been a massive disappointment, and Carlos Dunlap and Michael Johnson can't play forever. Allen could be a better version of Wallace Gilberry for the Bengals; a player who plays DE on first and second downs and kicks inside on third.

27. Carolina Panthers: K.D. Cannon, WR, Baylor
Cannon is raw, but has the ability to be a deep threat at WR. That's something Carolina needs right now. Of course, the Panthers consistently draft for future need early, so they'll probably do that again next year.

28. Denver Broncos: Jarrad Davis, LB, Florida
The Broncos lost Danny Trevathan this offseason and Brandon Marshall is a free agent next year. They neglected the ILB spot this year and should target one early. Davis could be a first rounder.

29. Green Bay Packers: Greg Pyke, OG, Georgia
The Packers traded up for Jason Spriggs because four linemen are free agents next year. Both guards are set to hit the open market and the Packers likely can't afford both. The Packers spent their first two picks on DBs last year and could do something similar next season.

30. Pittsburgh Steelers: Skai Moore, LB, South Carolina
I'm not sure if Moore is best as an inside or outside linebacker. He's a great athlete, but very thin. He could be a first round pick and the Steelers need help at inside and outside linebacker.

31. Seattle Seahawks: Cam Sutton, CB, Tennessee
Richard Sherman is great at one spot, but the No. 2 CB spot can be upgraded. Sutton could very well go earlier than this if he has a good season.

32. New England Patriots: Christian McCaffrey, RB, Stanford
McCaffrey's game won't translate as well to the NFL as it does in college. Of course, he's one of the best RBs in college and is going to be a very good pro. The Patriots taking McCaffrey just seems like an inevitable outcome.