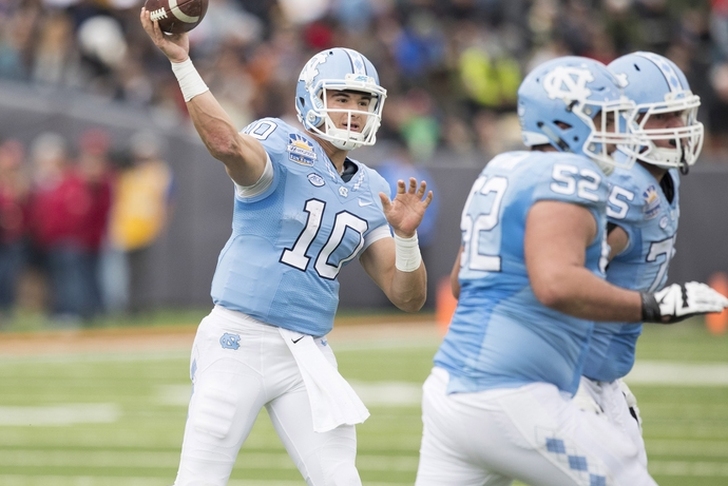 Click here for an updated, four-round version of my NFL Mock Draft!

The 2017 NFL Draft is two weeks and the draft buzz is at a fever pitch. It's misinformation season, with plenty of rumors and roughly 20 players forecasted as Top 10 picks. That makes it tricky to figure out where players will go and, of course, there will be the surprise picks and trades that ruin everyone's mock draft.

I have several changes this week, including many that might not be very popular. But remember, I'm trying to project what I think teams will do and forecast where players will be taken. I suspect this year's draft class could end up looking like the 2011 version, where several QBs went earlier than their talent said they should. If that's the case, that means several talented defensive players will end up falling in the draft.

I don't often project trades, but I'm going to include a few in this version. I also have three rounds for this version, so don't stop reading after the first round. And, of course, if feel free to follow me on Twitter. With all that out of the way, here's version 10.0 of my 2017 NFL Mock Draft.

1. Cleveland Browns: Myles Garrett, EDGE, Texas A&M
Sharpie it. Unless the Browns do something REALLY stupid or get a Godfather trade offer, the pick will be Myles Garrett. I don't buy the rumors that the Browns are thinking about taking Trubisky at No. 1. This type of story happens every year.

2. San Francisco 49ers: Solomon Thomas, DE, Stanford
The 49ers are in an interesting spot. Mitchell Trubisky (or any QB) probably isn't truly worth this pick. But it might also be too early for a WR like Mike Williams, and players like Jamal Adams, Jonathan Allen or Reuben Foster don't quite fit the scheme/needs. That leaves Solomon Thomas, who has been getting more buzz a potential No. 2 overall pick. The 49ers would try to turn him into their LEO edge rusher, although I think he'll be better as a Michael Bennett type. Malik Hooker (or Marshon Lattimore) is also an option, and Thomas also fits in the event the Panthers trade up. The Browns could try to move up as well and the Niners have made it clear they're willing to trade the pick. But that also could be a sign they aren't getting much interest. The Niners are a wild card in this year's draft.

3. Chicago Bears: Jamal Adams, S, LSU
With Mike Glennon signed and the Bears focusing on offense in free agency, I think this will be a defensive pick. Allen, Hooker and Thomas make sense, but so does Adams. He'd provide the Bears with a badly needed dynamic playmaker in the secondary. He profiles as a great strong safety.

4. Jacksonville Jaguars: Leonard Fournette, RB, LSU
They flirted with running backs in free agency and will have Fournette near the top of their big board. He'll drastically change their offense and make life much easier on Blake Bortles. If it's not Fournette, Alabama TE O.J. Howard is an option. On defense, Allen or Thomas could be the pick.

5. TRADE: Cleveland Browns (fromTennessee Titans (via Los Angeles Rams): Mitchell Trubisky, QB, North Carolina
The buzz the Browns could try jump the Jets to get Trubisky was there before Schefter's report. So if the Browns really want him, they need to move up to No. 5, which will be cheaper than sliding up to No. 2. The Browns would need to give up something along the lines of their No. 12 overall pick, their No. 52 overall pick in round two and a 2018 second round (likely the late one from the Texans). That's pretty close to even on the trade value chart and it gets the Browns the QB who fits Hue Jackson's system. After all, Trubisky reminds me of Andy Dalton. If the Titans don't trade this pick, I like Marshon Lattimore.

6. New York Jets: Marshon Lattimore, CB, Ohio State
I suspect the Jets really like Trubisky and if he's on the board, I think he'll be the pick. If not, the Jets can get a major upgrade at corner. Even with some injury worries, Lattimore is the top corner in this year's class. Plus, he could fit the Jets' best player available mindset.

7. Los Angeles Chargers: Malik Hooker, FS, Ohio State
The Chargers are a logical landing spot for Malik Hooker and it almost makes too much sense for it to happen. Hooker would provide the Chargers with a dynamic, impact safety. Hooker has perhaps the best ball skills in this year's class. If it's not Hooker, a wide out or a 3-technique like Jonathan Allen makes sense.

8. Carolina Panthers: Christian McCaffrey, RB, Stanford
I think the report of McCaffrey going in the top 10 is legit, in part because it meshes with a report from earlier this pre-draft season that the Panthers are high on McCaffrey. The Panthers need more weapons and McCaffrey can contribute on the ground, in the passing game and on returns. If it's not McCaffrey, I like a defensive end or O.J. Howard. Fournette is a potential pick if he lasts, but I don't think he will.

9. Cincinnati Bengals: Reuben Foster, LB, Alabama
The Bengals haven't played up to their talent level, which makes things a bit tricky here. They could use some impact players regardless of position on defense and that's what Foster provides. Even with the addition of Kevin Minter, the Bengals need young speed. He's the best player on the board, although the Bengals could go several different directions. Taco Charlton, Derek Barnett, Corey Davis and Mike Williams will be options too.

10. Buffalo Bills: Mike Williams, WR, Clemson
The Bills badly need another offensive weapon that's what Williams is. I'm torn between Williams, Howard, Corey Davis and even a CB like Gareon Conley for this pick, but I'll go with Williams for the time being. It's a real toss up and the Bills could go several direction.

11. New Orleans Saints: Taco Charlton, DE, Michigan
Go defense. It doesn't matter what position (well, maybe not safety), the Saints just need to pick a defensive player. I'll slot them another edge rusher for the time being, since Cam Jordan is the only proven, reliable option on the roster. If Derek Barnett is on the board he could be the pick and the Saints would strongly consider Foster as well. Deshaun Watson is a sleeper pick and one I really want to do. Maybe for the final version.

MUST READ: The Biggest NFL Draft Risers And Fallers

12. TRADE: Tennessee Titans (from Cleveland Browns via Philadelphia Eagles): O.J. Howard, TE, Alabama
If the Titans do trade down, they could go a few different directions. A WR or CB could be the target, but so is Howard. He'd give the Titans a dynamic weapon and there's a good chance he's higher than Corey Davis on the Titans' board. Plus, he could go top 10 or here to the Browns.

13. Arizona Cardinals: Patrick Mahomes, QB, Texas Tech
QB is an option and if Mahomes is on the board I expect the Cardinals to pull the trigger. Mahomes has immense upside, but also needs a year or two to develop. Arizona would be a great landing spot for him. But, there's a real chance he's off the board.

14. Philadelphia Eagles (via Minnesota Vikings): Marlon Humphrey, CB, Alabama
With wide out taken care of in free agency, the Eagles are likely looking at CB and RB. I wouldn't rule out Christian McCaffrey, but he's gone. The Eagles did bring Humphrey in for a visit and he fits the mold of a future No. 1 CB. The key for him will be his footwork.

15. Indianapolis Colts: Derek Barnett, EDGE, Tennessee
The Colts added three edge rushers this offseason, but owner Jim Irsay wants more. With Reuben Foster off the board (and my suspicion that Dalvin Cook won't be a first rounder), Barnett makes sense. A corner could be an option too, but Barnett would provide an instant impact to a pass rush that needs it.

16. Baltimore Ravens: Corey Davis, WR, Western Michigan
There are several needs on defense and on the offensive line, but Davis is great value here. He could very well go in the Top 13 picks, and this would give the Ravens a more reliable No. 1 option. Mike Wallace and Breshad Perriman are deep threats, and Kamar Aiken is gone. If it's not Davis, Cam Robinson or a defender at any position expect safety could be the pick.

To help cut down on the load times, Picks 17-32 of the Mock Draft are here!