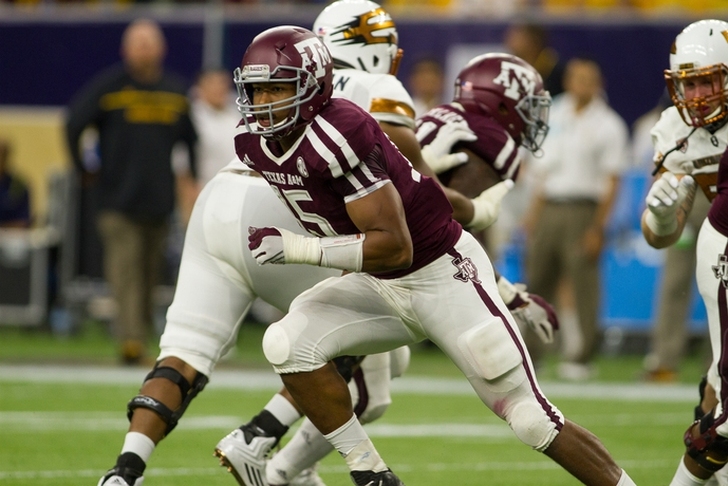 The start of the NFL season isn't here yet, but teams are already doing preliminary work on the 2017 NFL Draft. That's just the life of an NFL scout. While much can, and surely will, change between now and the NFL Draft, teams are starting to figure out which players will go high in the 2017 NFL Draft.

We've limited the first edition of our big board to only 20 players, and hopefully it doesn't look that terrible in hindsight in a few months. Several quality players just missed out and there are sure to be some surprise players that rise up during the season. With that in mind, here is our 2017 NFL Draft Big Board.

1. Myles Garrett, EDGE, Texas A&M
Garrett is the best edge rusher to enter the draft since Jadeveon Clowney and Khalil Mack. He would have been an easy top five pick if he were allowed to enter the draft last year. In two years at A&M, he's put up 22.5 sacks and 32 tackles for loss. He's a future star.

2. Deshaun Watson, QB, Clemson
Watson doesn't like the dual-threat moniker, but when you're the first QB to throw for 4,000 yards and 1,000 yards, that's what you are. It's not an insult either; Watson is deadly through the air and on the ground. He could still use some development in the finer areas of his games (like progression), but Watson is ready for the NFL. He could easily be the No. 1 pick this year.

3. Leonard Fournette, RB, LSU
Remember how Ezekiel Elliott went No. 4 in this year's draft? Fournette is even better. There could be some mileage concerns, but Fournette would have been an easy first round pick if he was eligible last year. Hell, he might have been NFL ready out of high school. He's the best back to come along since Adrian Peterson.

4. Cam Robinson, OT, Alabama
The offseason arrest could hurt Robinson's stock, but there's a reason those charges were dropped. Robinson is an NFL left tackle, a position that's not always that easy to find. He might have been the first offensive lineman taken in the 2016 Draft.

5. Jabrill Peppers, ATH, Michigan
I'm not sure what Peppers' NFL position is. It could safety, corner or even at linebacker. But Peppers is one of, if not the, best athletes in this year's draft. He could be a Tyrann Mathieu or Jalen Ramsey-type player. Michigan will play him all over the field this year, and he should make plenty of plays. He'll find a place in the NFL and thrive. Both Peppers and CB Jourdan Lewis (who just missed Top 20) could be first rounders.

6. Derek Barnett, EDGE, Tennessee
Here comes an absurd run on edge rushers, with little separation between this group. Barnett has put up 20 sacks in his first two years, numbers only surpassed by Garrett. However, at just 6-foot-3, 257-pounds, his lack of size could hurt him at DE. He needs to get better in coverage to move to a 3-4.

7. Charles Harris, EDGE, Missouri
Oh look, another really good Missouri pass rusher. The Tigers will likely struggle this year, which will keep Harris out of the national eye for the most part. However, he's crazy productive with 18.5 tackles for loss. Like Barnett, he'll need to work on dropping into coverage if he's going to be a 3-4 OLB.

8. Carl Lawson, EDGE, Auburn
Injuries hurt Lawson's production last year, as he posted just one sack in seven games. He needs to bounce back in a big way to justify this ranking, but the pass rushing ability is there. Like the previous two players, his size is less-than-ideal in a 4-3 scheme and he'll need to get better dropping back for a 3-4 scheme.

9. Tim Williams, EDGE, Alabama
Williams' only job last year was to get to the QB. And he did just that, with 9.5 sacks in a part-time role. He's a full-fledged starter now, which means he needs to prove himself against the run. NFL teams always need pass rushers, but Williams must step up in the other areas of the game to be a Top 10 pick. If he does that, Williams could go even higher.

10. Malik McDowell, DL, Michigan State
McDowell checks in at 6-foot-6, 276 pounds. He can play several positions on the defensive line, and recorded 13 tackles for loss. If he continues to grow and develop, he'll be a top five pick.

11. Jonathan Allen, DL, Alabama
Allen could have been a first round pick, but decided to come back. With 12 sacks last year, he's proven he can actually get to the passer. This might end up being too low for Allen.

13. Jalen "Teez" Tabor, CB, Florida
Remember how Vernon Hargreaves went No. 11 last year? He wasn't the best corner on his team. That was Tabor. Suspensions (he'll miss Week 1 this year) could hurt his stock, but Tabor is a future No. 1 corner.

14. Jamal Adams, S, LSU
At 6-foot and just over 210-pounds, Adams doesn't have great size. But neither does Tyrann Mathieu. Adams had four picks last year and 5.5 tackles for loss, proving himself as a threat in the box and in coverage. He could be a Top 10 pick if a team (say, the Titans?) with a need at safety picks high.

15. JuJu Smith-Schuster, WR, USC
He's probably one of the more physical wide outs to enter the draft in the last few years. He's put up impressive numbers at USC and that should translate over to the pros. Drops can be an issue at times, but Smith-Schuster should be the first wide out off the board.

16. Raekwon McMillan, LB, Ohio State
It's a quality LB again class this year, with (hopefully) fewer injury complications. McMillan is the best of the bunch. He has a great size-speed combo, and should be a very talented MLB (in either a 3-4 or 4-3 scheme).

17. Dalvin Cook, RB, Florida State
There are guys like Christian McCaffrey (who is Reggie Bush 2.0 without the injuries), Nick Chubb (knee concerns but he's talented) and even Royce Freeman (another really good Oregon RB), but Cook is the best of the bunch. He was limited at times by injuries, but still showed Warrick Dunn level of play at FSU.

18. Pat Elflein, OL, Ohio State
Elflein was a guard last year, but moved to center this season. While his NFL future might be at guard, succeeding at center can only help his draft stock. Teams are more willing to spend a first rounder on an interior lineman, and that could benefit Elflein.

19. Roderick Johnson, OT, Florida State
Come draft time, this could be too low for Johnson. It's looking like a less-than-stellar offensive line class, and that's a position that tends to rise. He has the size (he's 6-foot-7), but needs refinement on his technique. With the right coaching, Johnson can be a franchise left tackle.

20. Brad Kaaya, QB, Miami (FL)
QBs rise during the draft process, as we saw with Carson Wentz. Kaaya is a two-year starter at Miami and his junior year should be his best yet. With Mark Richt as head coach, Kaaya needs to make the next leap forward. If he does that, No. 20 will be way too low for him.