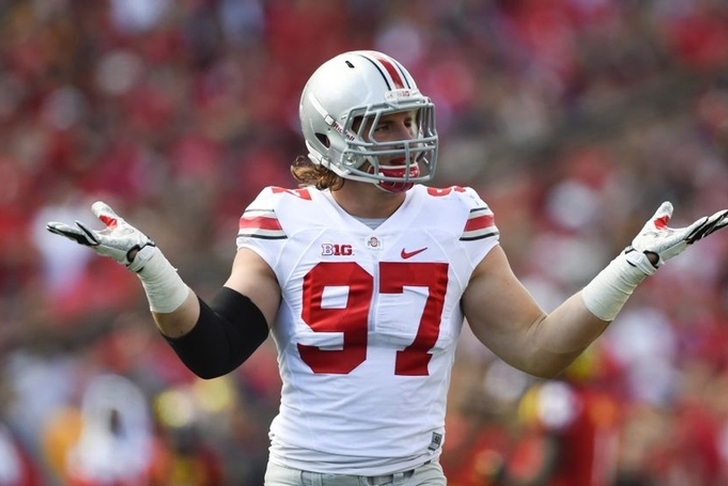 The NFL season is only in its fifth week, but that doesn't mean it's too early to look ahead to the next NFL Draft. This is also a wonderful opportunity to indulge the unhealthy obsession I have with the Draft. The first version went over pretty well, so it's time for volume two.

The draft order is based on my Power Rankings. The actual NFL Draft order will assuredly look much different come April, so don't put too much stock into where teams are drafting. In fact, the actual Draft order can't look this way because there isn't an AFC South team high enough. This is an exercise in trying to project team needs and where prospects could end up going. I don't have a full list of team needs, but I'll get to that once the season begins to wind down.

A new no. 1 pick, thanks to a reshuffling of the draft order. The Jaguars will get Dante Fowler back at one DE spot, but have a need at the other. Bosa is one of the safest picks in the draft and worthy of No. 1 overall consideration. Most of the Jaguars' top needs don't match up with the top talent in the draft.

The Bucs desperately need offensive line help and Tunsil gets the nod after Stanley had some minor issues against Clemson. Either player would fill a huge need and be a great pick. Of course, Tunsil hasn't played yet this season because of a NCAA investigation

I don't really expect the Lions to pick this high, but if they do, they'd likely jump all over the chance to taken an elite DT prospect. A corner like Vernon Hargreaves is also an option. The Lions miss Nick Fairley and Ndamukong Suh, and Nkedmiche is talented enough to be the No. 1 overall pick.

Stanley fills a massive need for the Dolphins, who need help on the offensive line. This is good value for him too, as Stanley might be the top OT off the board.

The 49ers need better players at corner, and Hargreaves is the best CB in the class. While Hagreaves isn't as long as GM Trent Baalke likes, he's a heck of a player.

I don't expect the top QB in the draft (be it Goff or someone else) to sneak out of the top five, but this is how the order broke down and I won't project any trades in the this mock. If the Texans can get Goff, QB guru Bill O'Brien could do wonders with him.

Expect the Saints to spend this pick on a defensive player. The top ones are off the board, but Ramsey is talented. He's a playmaker who will make a great CB at the next level. He could play safety too, but the Saints need safety help.

Many want the Bears to take a QB, but I'm not sure there is one worth drafting here with Goff off the board. That might change come Draft day, but for now, the Bears get a needed edge rusher. Floyd was probably a bit too low in my last mock, especially since pass rushers tend to rise. His partner in crime, Jordan Jenkins, is also a well-regarded prospect.

This might be a bit high for Conklin in the wake of his knee injury, but the Titans could use some offensive line help. He'd an upgrade over Jeremiah Poutasi at right tackle.

Thomas is one of several WRs who could be the top one off the board. This is likely too high for Thomas, but he fills a need and should be a first round pick. Plus, keeping the local product in-state is always popular.

The Eagles need offensive line help, as shown by their failure to effectively move the ball on offense. This might be a tad too high for Decker, but he's the last OTs truly worth a first rounder.

I had Boyd here last time, but I think Treadwell might be a better fit for the Ravens. He'd be the bigger receiver to pair with Breshad Perriman, whenever he gets back.

So ... this turned out great for the Raiders. I'd be surprised if Smith fell outside the Top 10, but that's what happened here. I LOVE Smith and think he's going to be one of the best LBs in the NFL. He and Khalil Mack would give the Raiders one of the, if not the, best LB duos in the NFL.

Jack has already decided to turn pro, and he should be a first rounder even with his knee injury. He's a freak athlete and would give the Redskins a true building block on defense.

Same selection, only earlier. Robinson would be a great fit in Dallas. Nick Hayden shouldn't be starting, but the Cowboys do have Tyrone Crawford. Robinson and Crawford would be a perfect tandem in Rod Marinelli's defense.

For the sake of Andrew Luck, the Colts need to upgrade their offensive line. However, there aren't any worth drafting at this point. Of course, the Colts will likely be in a position to take a guard at the end of round one in the real draft. Cravens is a 'tweener, as it's not clear if he's best as a safety or linebacker. Either way, the Colts could use his presence in the box.

Derrick Johnson is still playing at a high level, but he is aging. Josh Mauga isn't an ideal starter at MLB. Ragland could be the first ILB off the board.

I liked the way Lawson played against Notre Dame, which is why he jumps into the first round. He just missed out last time. The Chargers have missed on pass rushers in recent drafts, but could change that by taking Lawson.

The Rams need more weapons, and Boyd could be the top WR off the board.

The Vikings are close to being a dangerous team. Mike Wallace is a deep threat, but Teddy Bridgewater needs more weapons. Doctson fills that role and will likely rise as the Draft approaches, especially if he continues playing well. If you're wondering where Clemson WR Mike Williams is, I'm worried his neck injury will scare teams.

The Bills are loaded at multiple positions, but could use some depth on the defensive line. Plus, Kevin Williams is aging. Clark probably should have made this mock draft last time. He's got Top 20 potential.

The Steelers need corner help badly and Sutton could be a first rounder.

If Hackenberg is still on the board when the Jets pick, they might have to pull the trigger, especially this late in the draft. He's got all the tools to be a successful NFL QB; he just needs time in the pocket and some development.

The Cardinals need another pass rusher and Jenkins could be a first rounder. There is a chance he'll be the first OLB off the board.

Lee is a Ryan Shazier clone. The Falcons need help at LB and Lee would be great value at this point.

The Broncos could use an offensive lineman, but the pickings are slim. With limited needs, the Broncos can take the best player on the board. That's Buckner, who would be a great fit in Denver's 3-4 scheme.

Oakman has a high ceiling, but needs polishing. The Bengals love to add pass rushers and Oakman could end up being a steal. Or a bust. It's going to be one or the other.