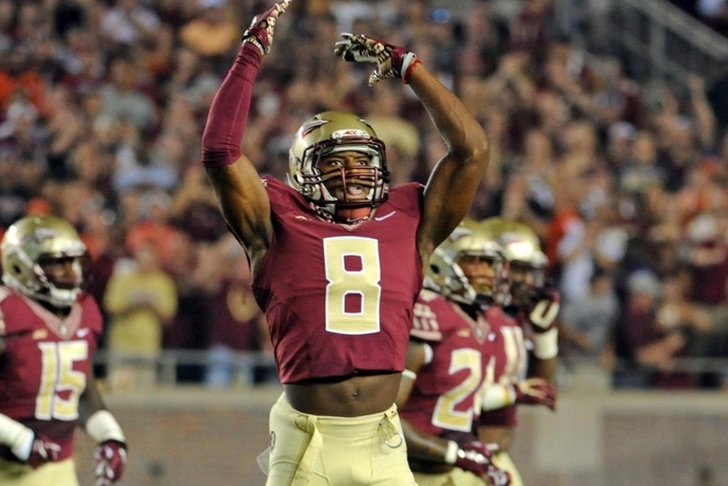 The NFL season is at its halfway point, and we're getting closer and closer to the NFL Draft. It's time for another mock draft, and the fans of teams that are struggling badly this season might have already turned their focus to the Draft. This is also a wonderful opportunity to indulge the unhealthy obsession I have with the Draft. The first four versions were well received, so it's time for volume five.

I'm switching up the order by basing it on the current NFL Draft order (as of November 4th). The actual order will assuredly look much different come April, so don't put too much stock into where teams are drafting. This is an exercise in trying to project team needs and where prospects could end up going. I don't have a full list of team needs, but I'll get to that once the season begins to wind down.

I'm not sure the Lions will pick this high, but if they do, they'd likely jump all over the chance to taken an elite DT prospect. A corner like Vernon Hargreaves is also an option, as is an OT. The Lions miss Nick Fairley and Ndamukong Suh, and Nkedmiche is more than talented enough to be the No. 1 overall pick.

The Titans have major needs in the secondary. Ramsey and Vernon Hargreaves will compete to be the first corner off the board. Either one would make sense.

If this is how the draft order breaks down, the Browns have to spend the third overall pick on QB. Goff, despite an awful game against Utah, still looks like the Draft's top QB.

I'd be surprised if the Chargers were picking this early, but adding a stud tackle makes sense. It's too early for any of the outside linebackers, and the team needs offensive line help. Tunsil will compete with Ronnie Stanley to be the first OT off the board and either would be a good pick. Joey Bosa could be an option here, too.

Steve Smith is likely going to retire, while Breshad Perriman has yet to contribute. Treadwell is a very different player than Perriman, and the duo could be a good fit. A pass rusher or corner is also an option.

The 49ers need better players at corner, and Hargreaves is my favorite CB in the class. While Hagreaves isn't as long as GM Trent Baalke likes, he's a heck of a player.

If Stanley is still on the board at this point, the Jaguars have to pull the trigger. Luke Joeckel has struggled, as has Jermey Parnell. Stanley would be an upgrade over either player.

Bosa isn't a perfect fit in Chicago, but he's a steal at this point. Like, complete highway robbery. He'd give the Bears a needed pass rushing boost. A 3-4 outside linebacker would be preferred, but there might not be one worth taking this early.

The Cowboys could target a stud defensive player, but Jerry Jones and Co. might want to settle the running back position now that Joseph Randle is off the team. Darren McFadden only has a few years left and no one else on the roster is a proven threat. Elliott is the only RB worth a first rounder this year. If the Cowboys pick this early, taking a QB to groom behind Romo is an option.

I got a chance to watch more of Lynch, and I was impressed. He's not perfect, but he has a strong arm and the potential is there. QB guru Bill O'Brien could do wonders with him. Still, this might be a tad high for Lynch.

The rest of the top players that fit the Chiefs' needs are off the board, while Smith could eventually replace Derrick Johnson. Smith would be an immediate upgrade over Josh Mauga. Smith is one of my favorite prospects in the Draft and reminds me of Patrick Willis.

This is an odd position for the Dolphins, as their needs and the players on the board don't exactly match. I'd left Fuller out of previous editions because he blew out his knee at the end of September, but I think he'll recover in time to be a mid-first rounder if he turns pro.

The Bucs desperately need offensive line help and Decker is the top one left on the board. This might be a tad high for him.

The Bills are loaded at multiple positions, but could use some depth at outside linebacker. Floyd could be a Top-20 pick.

The Eagles need offensive line help, but Buckner is a great fit for the Eagles. He already knows Chip Kelly from their time at Oregon, and could start right away.

The Seahawk offensive line has not look good this season. Alexander is the best OG in the draft and he'd be an upgrade right away. This might be a bit too early for him, but Seattle really needs help.

I like Lawrence Timmons, but he's got a $15 million cap hit next season and might not be back, especially at that price. Jack can replace Timmons, even if Jack is coming off a knee injury. Corner is also a big need for the Steelers.

Robinson is decent value here, and he helps a Saints defense that has major holes. Defense is likely where the Saints spend this pick, and they might just take the best player on the board. Robinson could start right away for the Saints.

The Rams need more weapons, and Doctson should be a first rounder. He's looked great this season and has really helped his stock.

Lawson can give the Jets the pass rusher they need. I strongly considered Penn State's Christian Hackenberg, but the Jets might elect to not spend a first rounder on a QB. Still, Hackenberg could go in Round One.

The Raiders really, really need corner help and this is the right range for White.

The Vikings are close to being a dangerous team. Stefon Diggs has emerged, but Teddy Bridgewater needs more weapons. Boyd could be one of the first WRs off the board.

For the sake of Andrew Luck, the Colts need to upgrade their offensive line. Somebody needs to protect Luck, and Conklin might be able to start right away.

I don't know if Cravens is a LB or safety at the next level, but he'd fit in New York. The Giants have needs at both and have struggled to cover tight ends for years. Cravens can fill that role in New York.

The Cardinals need another pass rusher and Jenkins could be a first rounder.

The Broncos could use an offensive lineman, but the pickings are slim. With limited needs, the Broncos can take the best player on the board. That could be Washington, who would add depth to the Denver line.