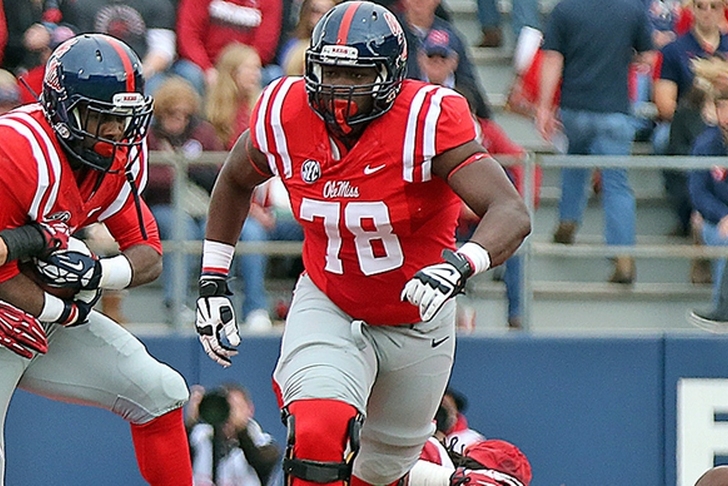 The NFL season is nearing its end, and we're getting closer and closer to the NFL Draft. It's time for another mock draft, since the fans of teams that are struggling badly this season might have already turned their focus to the Draft. This is also a wonderful opportunity to indulge the unhealthy obsession I have with the Draft. The first versions were well received, so it's time for volume eight.

The order is based on the current NFL Draft order (as of December 22nd). The actual order will assuredly look much different come April, so don't put too much stock into where teams are drafting. This is an exercise in trying to project team needs and where prospects could end up going. I don't have a full list of team needs, but a few of the ones I've gotten to are linked where applicable.

1. Tennessee Titans: Laremy Tunsil, OT, Ole Miss
The Titans have a need in the secondary, but their No. 1 team need is at tackle. Taylor Lewan is one starter, but the team needs another to keep Marcus Mariota upright. Tunsil and Ronnie Stanley will battle to be the top tackle off the board. Either one is a strong pick.

2. Cleveland Browns: Jared Goff, QB, California
If this is how the draft order breaks down, that means Johnny Manziel's time as the starting QB didn't go very well and QB is team need that has to be addressed. Goff is far from the perfect QB prospect, but he could be the franchise QB the team is looking for.

3. Baltimore Ravens: Jalen Ramsey, CB, FSU
The Ravens' biggest team need is at corner, and Ramsey is one of the best CB prospects in awhile. He could also be a great safety, but he'll likely play corner. Adding a wide receiver is also an option.

4. San Diego Chargers: Ronnie Stanley, OT, Notre Dame
The Chargers won't add a safety, TE or center this early, although those are their biggest team needs. Adding an offensive tackle does fill a major need, however. Stanley can be the long-term left tackle the team lacks.

5. Dallas Cowboys: Paxton Lynch, QB, Memphis
With Romo hurt again, the Cowboys have a chance to grab a franchise QB to groom behind Romo. It won't help their immediate short-term title hopes in the same way adding a stud defensive player will, but adding a QB extends their Super Bowl window another 10 years. Taking Lynch (or Goff) is the best thing for the future of the franchise.

6. San Francisco 49ers: Jaylon Smith, LB, Notre Dame
Adding a QB could be an option, especially if Dallas passes on one. That's not the case here, but the 49ers can address some defensive shortcomings instead. Smith is one of my favorite players in the draft and reminds me of Patrick Willis. That comparison should please 49ers fans. One of the 49ers' biggest team needs is at MLB.

7. Miami Dolphins: Vernon Hargreaves, CB, Florida
This is the right range for Hargreaves and it fills a need. It's a strong match and makes perfect sense. The team needs offensive line help, but there aren't any players worth grabbing.

8. Jacksonville Jaguars: Robert Nkemdiche, DT, Ole Miss
The Jaguars need some pass defensive line help, especially inside. There are some off-the-field worries for Nkemdiche, but he could go in the Top 5 and would help the Jags' defensive line right away. He and Dante Fowler would be a great tandem for years.

9. New Orleans Saints: DeForest Buckner, DE, Oregon
The Saints defense needs help everywhere, Buckner is a perfect fit for the team's 3-4 defense. Joey Bosa would be the pick, but he might not be able to play in the 3-4 defense. That could cause him to slide.

10. Chicago Bears: Leonard Floyd, OLB, UGA
Floyd fills a major need, as the Bears must find 3-4 pass rushers this offseason. This might be a bit too high for him, but pass rushers often rise during the Draft process.

11. Detroit Lions: Joey Bosa, DE, Ohio State
The Lions could use help in the trenches and Bosa is too good a value to pass up. The team as Jason Jones to pair with Ziggy Ansah, but Jones is a free agent and can be upgraded.

12. Tampa Bay Buccaneers: Kenny Clark, DT, UCLA
The Bucs would love an offensive lineman, but the top two are gone. The Bucs could use some interior d-line help, and Clark has a lot of talent.

13. New York Giants: Ezekiel Elliott, RB, OSU
There's a chance Elliott won't last this long, but the Giants shouldn't let him slip further. They've been using an ineffective running back by committee all season long. Elliott can be the workhorse back the team needs.

14. Oakland Raiders: Mackenzie Alexander, CB, Clemson
The Raiders really, really need corner help and Alexander could be the answer. He had a great season for Clemson and might parlay that into being a first round selection.

15. Philadelphia Eagles: Taylor Decker, OT, Ohio State
The Eagles need offensive line help, and Decker can play guard or tackle for the team. Guard is the bigger need, as the Eagles were terrible at that spot this year.

16. Buffalo Bills: Myles Jack, LB, UCLA
The Bills are loaded at multiple positions, but could use some help at LB. He's coming off a knee injury, but should still be a mid-first round pick. A right tackle is also a major need for Buffalo.

17. Indianapolis Colts: Jack Conklin, OT, Michigan State
For the sake of Andrew Luck, the Colts must upgrade their offensive line. Somebody needs to protect Luck, and Conklin might be able to start right away. He might return to college for his senior season.

18. St. Louis Rams: Laquon Treadwell, WR, Ole Miss
The Rams need more weapons, and this is a steal for the Rams. He could very well be a top 10 pick come April. WR and QB are the two biggest team needs for the Rams.

19. Atlanta Falcons: Jayron Kearse, S, Clemson
The Falcons need help at safety and Kearse is the best on in the draft. A MLB, TE and even WR are options for the Falcons.

20. New York Jets: Shaq Lawson, OLB, Clemson
Lawson can give the Jets the pass rusher they need. This is strong value for him and he could go even higher.

21. Minnesota Vikings: Josh Doctson, WR, TCU
The Vikings are close to being a dangerous team. Stefon Diggs has emerged, but Teddy Bridgewater needs more weapons. Doctson should be a first rounder.

22. Seattle Seahawks: Shon Coleman, OT, Auburn
The Seahawk offensive line has not looked good this season. Coleman is the best lineman left on board and he could play right away at right tackle.

23. Kansas City Chiefs: Jerald Hawkins, OT, LSU
Hawkins could replace Eric Fisher, who is rapidly approaching bust status. Hawkins could sneak into the end of the first round.

24. Pittsburgh Steelers: Tre'Davious White, CB, LSU
Corner is a big need for the Steelers and White is a worthy of a first round pick. Expect this pick to be spent on the defensive side of the ball.

25. Washington Redskins: Scooby Wright, LB, Arizona
The Redskins need MLB and corner help, and Wright might be the best player at either spot. There are medical concerns, but there's no doubting his ability.

26. Houston Texans: A'Shawn Robinson, DT, Alabama
There aren't any QBs worth taking here, although that is the Texans' biggest need. The team could use some help on the defensive line, so taking Robinson makes sense.

27. Green Bay Packers: Emmanuel Ogbah, OLB, Oklahoma State
The Packers could use some pass rushing help, especially since Julius Peppers is aging. Ogbah could end up going higher than this, as pass rushers tend to rise.

28. Denver Broncos: Jarran Reed, DT, Alabama
The Broncos could use an offensive lineman, but the pickings are slim. With limited needs, the Broncos can take the best player on the board. That could be Reed, who would add depth and provide a replacement if the team losses a free agent. He's a DT for Alabama, but could shift out and be a 3-4 DE for Alabama. However, his best spot might be at nose guard. The Broncos can find a spot for him.

29. Cincinnati Bengals: Andrew Billings, DT, Baylor
Billings is the best defensive player on Baylor, and yes, that includes Shawn Oakman. Billings would be an incredible compliment to Geno Atkins.

30. Arizona Cardinals: Jordan Jenkins, OLB, Georgia
The Cardinals need another pass rusher and Jenkins could be a first rounder.

31. Carolina Panthers: Germain Ifedi, OT, Texas A&M
The Panthers should not be starting Michael Oher. Cam Newton needs better protection. Ifedi might not be able to make it as a left tackle, but he'd help the Panthers O-line in some form.