2016 NFL Mock Draft: Projecting The Second Round Picks On Day 2 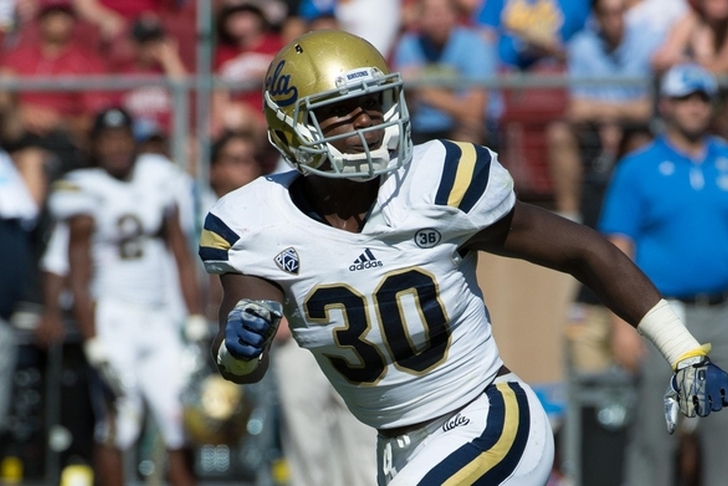 The NFL Draft officially underway and it’s time for a mock draft of the second round. Round 1 is already in the books (you can see the grades here), and the second and third rounds will begin shortly. We've taken a stab at projecting the second round below.

Mock drafts for the second round are even harder than the first. We've had months to forecast the first round, and essentially just 24 hours for the second. The vast majority of these picks will end up being wrong, but this is an exercise of pointing out need and where players could go today.

I'm very confident that there will be a lot of trades, but I won't end up projecting them. It's just too complicated for a second round mock.

32. Cleveland Browns: Myles Jack, LB, UCLA
I don't think the Browns will keep this pick, and will try to land a 2017 first rounder in a move down. With so many talented players on the board, they might just get it. If they keep the pick or trade it, they could take Jack. He's a Top 5 talent that the Browns might have taken at No. 8 if it wasn't for his knee injury. It the Browns move down, they could take MSU QB Connor Cook.

33. Tennessee Titans: Vonn Bell, S, Ohio State
Oh look, another OSU player. The Titans need secondary help and they've look hard at Bell. A trade down is an option too, as it is for almost every team picking in the Top 10 of the second round.

34. Dallas Cowboys: Kevin Dodd, DE, Clemson
After going running back in Round 1, this pick has to be defense. It's either a corner or a pass rusher, and Dodd has the quick twitch ability the Cowboys want in their DEs.

35. San Diego Chargers: T.J. Green, DB, Clemson
The Chargers passed on Jalen Ramsey, but get a mini-Ramsey is T.J. Green. He's a similar player and could go early in the second round, and some thought he could be a first rounder. This might be a little high for Green, but I'm not really sure what the Chargers will do. After all, they took Joey Bosa when no one thought they would.

36. Baltimore Ravens: Mackensie Alexander, CB, Clemson
This is either going to be a pass rusher or a corner. Alexander has first round talent, although there are several gifted pass rushers on the board here that could be pick. Alexander would be a great pick for the Ravens.

37. Kansas City Chiefs (via 49ers): Cody Whitehair, OG, Kansas State
This would work out great for the Chiefs, as Whitehair should have gone before Joshua Garnett. The Chiefs badly need OG help, and this is a strong pick. A corner or MLB would also make sense.

38. Jacksonville Jaguars: Noah Spence, OLB, Eastern Kentucky
If Jack is on the board, he could very well be the pick. If not, expect the Jags to add another pass rusher. Spence has the ability to be a great

39. Tampa Bay Buccaneers: Emmanuel Ogbah, DE, Oklahoma State
The Bucs got a corner in Round 1, and will target a pass rusher in Round 2. Ogbah is solid value here and would be a good fit for the Bucs.

40. New York Giants: Michael Thomas, WR, Ohio State
Thomas would be a good compliment for Odell Beckham. He's a burner, although he's still raw. A pick on either side of the trenches could make sense.

41. Chicago Bears: Kendall Fuller, CB, Virginia Tech
Fuller could have been a first rounder if healthy. The Bears need CB help and get to pair Fuller with his brother Kyle.

42. Miami Dolphins: Derrick Henry, RB, Alabama
The Dolphins wanted Elliott, but Henry is a nice consolation prize. While a speedier back would be a better pairing with Jay Ajayi, Henry could just take over the full-time back instead. This might be the floor for Myles Jack today.

43. Tennessee Titans (from Rams via Eagles): Reggie Ragland, ILB, Alabama
Ragland is only a two-down ILB, but I'm a bit surprised he's slipped so far. Not many teams need a 3-4 ILB early, and this would be a home-run selection for the Titans.

44. Oakland Raiders: Chris Jones, DT, Mississippi State
There's going to be a massive run on DTs in the second round and this might be the latest in occurs. Jones could have been a first rounder and has the pass rushing and versatility the Raiders like.

45. Tennessee Titans (via Rams): Braxton Miller, WR, Ohio State
The Titans reportedly like Miller, and he could learn behind Kendall Wright for a season before taking over for him. Miller is a boom-or-bust pick who will go in Round 2.

46. Detroit Lions: Jarran Reed, DT, Alabama
I thought the Lions could have taken Reed in the first round. This is a steal and would be a wonderful selection. A DT makes a ton of sense for the Lions.

47. New Orleans Saints: Xavien Howard, CB, Baylor
Howard, although he has a medical red flag, could go earlier than this. The Saints need some secondary help, but might just end up taking the best defensive player on their board. And yes, that includes another DT.

48. Indianapolis Colts: A'Shawn Robinson, DT, Alabama
The Colts could go pass rusher here, but are also looking for a run-stuffing DT. That's exactly what Robinson is and this would be a steal for the Colts.

49. Buffalo Bills: Andrew Billings, DT, Baylor
Like I said, here's the run on DTs. Billings could have easily been a first round selection and he'll be a great fit in Buffalo.

50. Atlanta Falcons: Hunter Henry, TE, Arkansas
The Falcons are still searching for a Tony Gonzales replacement. It might be Henry, the best TE in a weak draft class. Another edge rusher or LB is an option here as well.

51. New York Jets: Jason Spriggs, OT, Indiana
The Jets landed an ILB in Darron Lee in the first and now have a tackle in Correa in the second. He could go even higher than this and the Jets might even move up for him. There were rumors he could be their first round pick.

52. Houston Texans: Shon Coleman, OT, Auburn
The Texans need OL depth, and could target several players with this spot. Coleman is older and still raw, but has potential. He could take over at either LT or RT in the near future for Houston.

53. Washington Redskins: Nick Martin, C, Notre Dame
The Redskins want to build in the trenches, and this is the right range for Martin. Washington needs interior line help, but they could add a DL here as well. Martin can play guard or center for Washington.

54. Minnesota Vikings: Austin Johnson, DT, Penn State
This is basically a value pick, as the Vikings' needs don't match up with the players on the board. Johnson will provide depth on the DL, something Mike Zimmer loves to have.

55. Cincinnati Bengals: Tyler Boyd, WR, Pittsburgh
Most of the DTs are off the board for the Bengals, but there are a few wide outs. Either Boyd or Sterling Shepard would make sense, and they'll help replace Marvin Jones and Mohamed Sanu.

56. Seattle Seahawks: Jonathan Bullard, DE, Florida
I could easily see Bullard going before this, but the Seahawks should jump all over him. He'll provide needed depth on the DL for Seattle.

57. Green Bay Packers: Su'a Cravens, LB/S, USC
The Packers won't use Cravens as a safety, but as a third down LB in the mold of Deone Buccannon. The Packers need an ILB who can cover, and that might be Cravens' best fit.

58. Pittsburgh Steelers: Darian Thompson, S, Boise State
Had the Raiders not taken Karl Joseph, I think they would have added Thompson in Round 2. This is good value and the Steelers badly need another starting safety.

59. Kansas City Chiefs: Kentrell Brothers, ILB, Missouri
The Chiefs need another starting ILB and a replacement for Derrick Johnson in a few years. This is the right range for Brothers.

60. New England Patriots: Kamalei Correa, OLB, Boise State
The Patriots need pass rushing help, especially now that Chandler Jones is an Arizona. This is great value for Correa, who could go well before this.

61. New England Patriots (via Cardinals): Sean Davis, DB, Maryland
This isn't a big name, but it's a classic Pats pick. He's a versatile DB and the type of player Bill Belichick loves.

62. Carolina Panthers: Sterling Shepard, WR, Oklahoma
This is as far as I see Shepard falling in Round 2. He could go before this and will be a very good NFL WR. The Panthers could really use someone of his ability (and reliable hands).

63. Denver Broncos: Jihad Ward, DE, Illinois
Ward fills a need and is solid value for the Broncos. With Malik Jackson gone, Ward could step in and replace him.