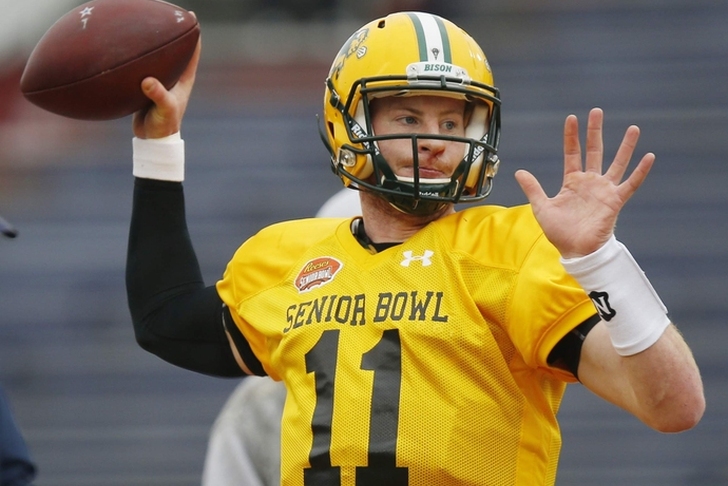 This version has been updated to reflect the results of Super Bowl 50. The picks didn't change, only the order did. Original story follows below.

The NFL season is nearly over, with the just Super Bowl 50 left until the NFL Draft. It's time for another mock draft, especially now that the Senior Bowl is over. We have a better idea of which players will go where come April, although much can (and likely) will change. This is also a wonderful opportunity to indulge the unhealthy obsession I have with the Draft.

With so much time before the actual NFL Draft, this remains an exercise in trying to project team needs and where prospects could end up going. I don't have a full list of team needs, but a few of the ones I've gotten to are linked where applicable.

1. Tennessee Titans: Laremy Tunsil, OT, Ole Miss
The Titans have a need in the secondary, but their No. 1 team need is at tackle. Taylor Lewan is one starter, but the team needs another to keep Marcus Mariota upright. Tunsil and Ronnie Stanley will battle to be the top tackle off the board. Either one is a strong pick. The Titans are likely to try and trade down as well.

2. Cleveland Browns: Carson Wentz, QB, North Dakota State
Johnny Manziel's time as the starting QB didn't go very well and QB is team need that has to be addressed. Manziel is all but officially gone and the Browns have to take a QB early. The Wentz hype train is already out of control, and there are reports the Browns prefer Wentz.

3. San Diego Chargers: Joey Bosa, DE/OLB, Ohio State
The Chargers won't add a safety, TE or center this early, although those are their biggest team needs. Adding an offensive tackle does fill a major need, but the team might prefer to add another pass rusher. I don't view Bosa as a strong fit for the 3-4 defense, but San Diego might not feel the same way.

4. Dallas Cowboys: Jared Goff, QB, Cal
With Romo hurt again, the Cowboys have a rare chance to grab a franchise QB to groom behind Romo. It won't help their immediate short-term title hopes in the same way adding a stud defensive player will, but adding a QB extends their Super Bowl window another 10 years. Taking Goff (or Wentz) is the best thing for the future of the franchise.

5. Jacksonville Jaguars: Jalen Ramsey, S, Florida State
The Jaguars badly need secondary help and Ramsey can play at either CB or safety. Safety might be his best fit, and the Jags can plug him in right away. Taking a pass rusher or offensive tackle is also an option.

6. Baltimore Ravens: Vernon Hargreaves III, CB, Florida
The Ravens' biggest team need is at corner, and Hargreaves is one of the best CB prospects in this draft. He struggled in the team's bowl game, but the rest of his tape balances that out. Adding a wide receiver is also an option, although that needed is lessened by Steve Smith returning.

7. San Francisco 49ers: Myles Jack, LB, UCLA
Adding a QB is an option, especially if Dallas passes on one. That's not the case here, but the 49ers can address some defensive shortcomings instead. Notre Dame LB Jaylon Smith would have made perfect sense, but his knee injury could cause him to drop. Jack also suffered a knee injury, but it occurred much earlier in the season. Much like Todd Gurley this year, Jack could go in the Top 10.

8. Miami Dolphins: Mackenzie Alexander, CB, Clemson
Adding Alexander fills a big need for the Dolphins. He could sneak into the Top 10. The team needs interior offensive line help, but there aren't any guards worth grabbing. There are several defensive linemen worth taking, but the team doesn't need to spend a high pick.

9. Tampa Bay Buccaneers: Ronnie Stanley, OT, Notre Dame
The Bucs would love an offensive lineman, so getting Stanley here is a steal. He could easily be a top five pick in April. Adding a defensive lineman is an option if Stanley is off the board. For more NFL Draft coverage, check out the Chat Sports Android and iPhone app.

10. New York Giants: Jaylon Smith, OLB, Notre Dame
The Giants have historically ignored linebackers in the draft, but perhaps this is the year it changes. Smith is a top five talent who could slip a bit on draft day because of a knee injury. He should be fine and he has the potential to be a great LB quickly in the NFL.

11. Chicago Bears: Noah Spence, OLB, Eastern Kentucky
Spence fills a major need, as the Bears must find 3-4 pass rushers this offseason. There's no doubting his talent, but his off-the-field issues could cost him on draft day. Had he not been banned by the Big Ten and kicked out of Ohio State, Spence would have likely been a top 10 pick. This might end up being higher than Spence ends up going.

12. New Orleans Saints: DeForest Buckner, DE, Oregon
The Saints defense needs help everywhere, Buckner is a perfect fit for the team's 3-4 defense. Taking Jaylon Smith is also an option, if he's on the board.

13. Philadelphia Eagles: Taylor Decker, OT, Ohio State
Ideally, a corner slips to the Eagles, but that's not the case here. The Eagles need offensive line help, and Decker can play guard or tackle for the team. Guard is the bigger need, as the Eagles were terrible at that spot this year.

14. Oakland Raiders: Robert Nkemdiche, DT, Ole Miss
The Raiders need corner help, but Nkemdiche is too talented to pass up. He has off-the-field issues that could cause him to drop on draft day. However, he should still go in the top 20 or so picks. Download the Chat Sports Android and iPhone app for more NFL Draft coverage.

16. Detroit Lions: Laquon Treadwell, WR, Ole Miss
With Calvin Johnson likely to retire, the Lions need a bigger WR for the red zone. Treadwell could have issues separating at the next level, but has the size the Lions need badly. Don't rule out Vernon Butler here either. The Lions could use help in the trenches and the team is reportedly very high on Butler and could take him in Round 1.

17. Atlanta Falcons: Darron Lee, LB, Ohio State
The Falcons need help at linebacker and Lee is a Top 20 talent. He's a similar player to Ryan Shazier and would be a strong fit for the Falcons.

18. Indianapolis Colts: Jack Conklin, OT, Michigan State
For the sake of Andrew Luck, the Colts must upgrade their offensive line. Unfortunately, there aren't any OL worth taking here. Fuller is (another) talented player coming off an injury and the team must help an upgrade at corner.

19. Buffalo Bills: Shaq Lawson, OLB, Clemson
The Bills are loaded at multiple positions, need pass rushing help. Mario Williams is likely a goner and the team could look to shift to a 3-4 scheme. Lawson could go even higher than this.

20. New York Jets: Reggie Ragland, MLB, Alabama
The Jets need MLB help, as both Demario Davis and David Harris can be upgraded. This is the right range for Ragland, who is easily the top 3-4 ILB this year. The Chat Sports Android and iPhone has more NFL Draft coverage.

21. Washington Redskins: Kenny Clark, DT, UCLA
The Redskins need to beef up on the defensive, and they'll likely target the defensive line. They did something similar last year. Clark should be a first rounder, and could very well be gone before this.

22. Houston Texans: Ezekiel Elliott, RB, Ohio State
There aren't any QBs worth taking here, although that is the Texans' biggest need. If the team does end up cutting Arian Foster, they'll need a new RB. Elliott is easily the best one in the draft.

23. Minnesota Vikings: Michael Thomas, WR, Ohio State
The Vikings are close to being a dangerous team. Stefon Diggs has emerged, but Teddy Bridgewater needs more weapons. Thomas should be a first rounder and has one of the best size-speed combos in the draft this year. There are several very talented WRs this year, which could help them all to drop because the supply is high.

24. Cincinnati Bengals: A'Shawn Robinson, DT, Alabama
Robinson could be long gone by the time the Bengals pick, making this a steal. He'd be the perfect replacement for Domata Peko. The Bengals have done a great job in recent years of finding a way to get value near the end of Round 1. Expect that to be the case again this year.

25. Pittsburgh Steelers: Eli Apple, CB, Ohio State
Corner is a big need for the Steelers and Apple is a worthy of a first round pick. Expect this pick to be spent on the defensive side of the ball. Pittsburgh has neglected the CB position for too long.

26. Seattle Seahawks: Cody Whitehair, OG, Kansas State
The Seahawk offensive line improved late, but more help is needed. Taking a tackle would be ideal, but there might not be any worth taking here. Whitehair is a borderline first rounder, and the best guard in the draft. Download the Chat Sports Android and iPhone app for more NFL Draft coverage.

27. Green Bay Packers: Leonard Floyd, OLB, Georgia
The Packers could use some pass rushing help, especially since Julius Peppers is aging. Floyd could end up going higher than this, as pass rushers tend to rise. An ILB is also an option.

28. Kansas City Chiefs: Sheldon Rankins, DL, Louisville
Rankins could be gone before this, thanks to a strong Senior Bowl. Defensive line doesn't seem like the biggest need for KC, but both DEs are free agents and the Chiefs might not be able to afford both.

29. Arizona Cardinals: Kevin Dodd, OLB, Clemson
The Cardinals need another pass rusher and Dodd could be a first rounder. He had a strong National Championship game, which did wonders for his draft stock.

30. Carolina Panthers: Braxton Miller, WR, Ohio State
The Panthers need to get Cam Newton some more weapons. Miller torched the Senior Bowl, and going in the first round is a serious possibility. At least one expert says Miller's effort was better than the one that launched Matt Jones into the first round years ago. Miller can do what Ted Ginn currently does for the Panthers, but minus the drops.

31. Denver Broncos: Su'a Cravens, LB, USC
The Broncos could use an offensive lineman, but the pickings are slim. Both of the team's talented MLBs are free agents, so bringing both back could be tough. If they lose one, Cravens could be a strong fit. He played safety at USC, but is too slow to make in the NFL. A switch to MLB in a 3-4 scheme could be perfect for him.