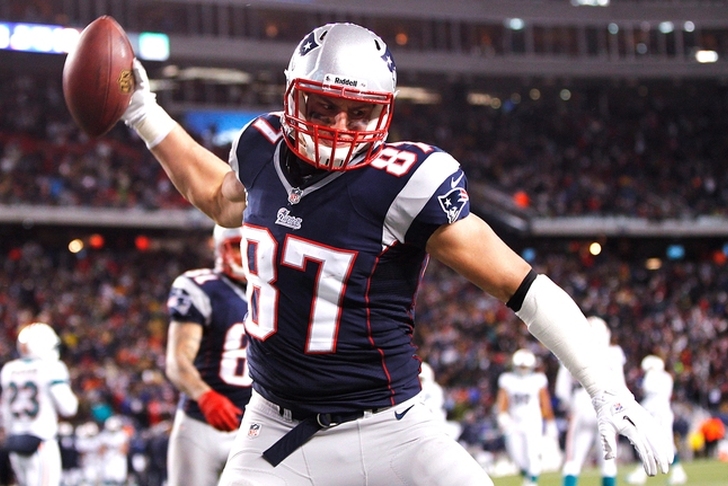 Two weeks of the NFL are now complete, and we have a better idea of which teams are legitimate playoff threats. It's still too early to declare any team the Super Bowl favorite, but it's not too early to start ranking all 32 teams. This list should change quite a bit each week and shouldn't be taken as gospel. While records are a big factor, power rankings are more than just a team's wins and losses. With that in mind, here are the NFL Power Rankings for Week 3.

Maybe the NFL shouldn't have gone after Tom Brady with such aggression. It looks like Brady is trying to make every team he faces pay for what the NFL did to him.

No Jordy Nelson, no problem for Aaron Rodgers. The Packers have played well so far and look like the class of the NFC.

The Cardinals have Carson Palmer back and they are playing like the same team that was destroying their competition before Palmer went down last season.

Andy Dalton is completing 68 percent of his passes, with 5 touchdowns and no picks. The Bengals are well on their way to making the playoffs for a fifth straight season.

The Broncos defense has been incredible. The offense, however, needs to improve quickly.

The Steelers' only loss was to the No. 1 team in these rankings. They crushed the 49ers in Week 2 and should be in the Top 10 for most of the season.

The Chiefs nearly beat the Broncos in Week 1, and probably should have. They appear to be serious contenders in the AFC.

The Falcons should have beaten the Eagles by more in Week 1, and probably should have lost to the Giants in Week 2. Still, they are undefeated and look like a much better team than they were last year.

The Jets' defense is carrying them, although Ryan Fitzpatrick has played just fine. We'll see if they can continue playing this well.

The loss to the Patriots hurts, but Buffalo has the defense to contend for a wild card berth. Their season really depends on Tyrod Taylor's play.

They'd be much higher (Top 5) if Tony Romo wasn't set to miss two months. Dallas will need to tread water until Romo and Dez Bryant return.

The Panthers are 2-0, but their wins are over the Jacksonville Jaguars and Houston Texans. Before they make it inside the Top 10, they'll need to prove themselves a bit more against better competition.

Yes, the Seahawks are above the Rams even though St. Louis won. But do any non-Rams fans really consider the Rams a better team than the Seahawks? Seattle is still one of the best teams in the NFC.

A loss to the Bengals is nothing to be ashamed of. The AFC West could be a tough division, so the Chargers have their work cut out for them.

The Rams looked great against the Seahawks, but then lost to the Redskins. It remains to be seen which Rams team will show up for most of the season.

The Vikings looked terrible against the 49ers, but bounced back with a win over the Lions. They look like the second-best team in the NFC North.

The Colts are 0-2, but they started 0-2 last season before winning six of their next seven games. They could go on a similar run this year.

The defense has been good, but the offense (especially the ground game) needs to improve. A loss to Jacksonville hurts their ranking.

The Ravens are 0-2, but they could just as easily be 2-0. They'll be fine this year and should start to rise in these rankings.

I'm not quite sure what to make of this team. The box score says Kirk Cousins didn't turn the ball over against the Rams, but he should have been picked at least once. I don't trust this team yet.

Another team I just don't trust right now. For now, they belong in the bottom half of the rankings. Their next five games aren't easy, so we should know just how good this team is soon.

The Lions have struggled early. It's not time to push the panic button yet, but they need to improve quickly.

The Giants really should be 2-0. Mistakes in the fourth quarter are killing them, although they could rectify that shortly.

The Eagles offense has looked just awful, but I can't shake the feeling that Chip Kelly will get it turned around soon.

The Raiders looked awful against the Bengals, but rebounded against the Ravens for a close win. My guess is they'll play somewhere in between for most of this season.

With games against the Patriots and Colts coming up, the Jaguars have a chance to make a big jump. For now, I don't trust them.

With such little offensive firepower, it's tough to trust Cleveland this season.

The Titans came crashing back to earth in Week 2 after looking amazing in Week 1. Until they develop some consistency, which might take some time for the young team, they'll be in the bottom third.

They've lost both games by just seven points, but both weren't as close as the score indicates. The Texans need better QB play and Arian Foster back.

Much like the Titans, the Bucs need more consistency. That could take time.

Go ahead and push the panic button New Orleans, especially if Drew Brees misses any games.

The Bears were in enough trouble with Jay Cutler. With no Cutler, they belong at the bottom of the power rankings.