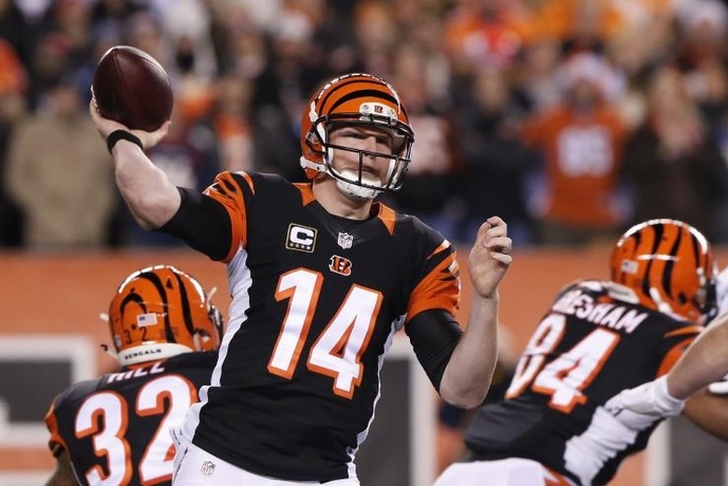 Five weeks of the NFL are now complete, and we have a better idea of which teams are legitimate playoff threats. It's still too early to declare any team the Super Bowl favorite, but it's not too early to start ranking all 32 teams. This list should change quite a bit each week and shouldn't be taken as gospel. While records are a big factor, power rankings are more than just a team's wins and losses. With that in mind, here are the NFL Power Rankings for Week 6.

Maybe the NFL shouldn't have gone after Tom Brady with such aggression. It looks like Brady is trying to make every team he faces pay for what the NFL did to him. New England has done nothing to prove they aren't the No. 1 team.

No Jordy Nelson, no problem for Aaron Rodgers. The Packers have played well so far and look like the class of the NFC. A game against the Rams could be a challenge.

I thought about moving the Bengals up, but decided against it. Of course, I said the same thing two weeks ago about the Cardinals and they lost the next week. Sorry in advance Bengals fans.

The Broncos defense has been incredible. Peyton Manning, however, has not. But even Peyton shines in comparison to the atrocity that is the Broncos' running game.

The Cardinals haven't played the toughest of schedules, but they are 4-1. It's tough to overlook their impressive +100 point differential, the most in the NFL by far.

The Panthers are 4-0, but their opponents have a combined five wins. If they keep winning they'll keep rising, but they need to prove themselves against better competition.

The more I watch this Jets' team, the more I think they are a real threat. Their only loss was a close one against the Eagles, when the Jets' were missing key players.

It hasn't been pretty without Big Ben, but the Steelers are still 3-2.

The Vikings looked terrible against the 49ers, but bounced back with wins over the Lions and Chargers. A loss to Denver is acceptable. With each game, that loss to the 49ers looks more and more like a fluke.

I still believe the Bills are a good team, but they drop because of the injury to Tyrod Taylor.

I'm very, very worried about their offensive line, but the defense looks strong. The Seahawks should have beaten the Bengals, and must drop after a loss. I still think this team will be a playoff team, but they must start closing out games.

The Giants really should be 5-0. With Romo out, the Giants are capitalizing. I consider them the favorites in the NFC East right now, even if the wins haven't been pretty.

The win wasn't pretty, but it's still a win. The Colts have flaws and they need Andrew Luck back soon. I'm worried about this team.

The AFC West could be a tough division, so the Chargers have their work cut out for them. I'm not totally sold on the Chargers yet, but they could compete for a wild card spot.

I really don't know what to make of this team. They have impressive wins over the Seahawks and Cardinals, but also lost to the Redskins. The offense, especially Nick Foles, came up empty against the Packers.

I still don't trust Kirk Cousins or Washington. They proved me right by giving away the game against the Falcons.

This is a young team that isn't consistent yet. Expect growing pains and flashes of talent throughout the season.

Dallas needed to tread water until Tony Romo and Dez Bryant return. The Cowboys have failed to do that. It's time to turn to Matt Cassel and hope the season isn't totally lost.

With such little offensive firepower, it's tough to trust Cleveland this season. Still, two wins is better than several other teams.

I'll say it. Jay Cutler has actually played okay. Just two weeks ago, I had the Bears in last place. That's the difference Cutler has made for the team.

The Ravens are 1-4, but they could just as easily be 5-0. Still, it's the record that matter and the Ravens don't look like a playoff contender.

Ouch. Losing to the Bears and losing Jamaal Charles? No team took a bigger fall than the Chiefs did this week.

When your only wins are over the Saints and Jaguars, you don't deserve a high ranking.

A win is a win, but don't put too much stock into beating a depleted Cowboys squad. I don't trust this team.

A blowout loss to the Falcons doesn't help and the Texans have major QB issues. The Texans couldn't even beat a Colts team without Andrew Luck.

It's safe to say the game against the Vikings was a fluke. I don't trust this team at all. You can make a real argument that any of the bottom six should be higher or lower than their ranking.

The Dolphins have already fired their head coach, which usually doesn't result in a happy ending at the end of the season. The team needs to run the ball more, but it might be too late to save its season.

The Jaguars haven't played very well this season. However, I wouldn't be surprised if they rise as the season progresses.

After that embarrassing showing against the Cardinals, the winless Lions deserve last place.