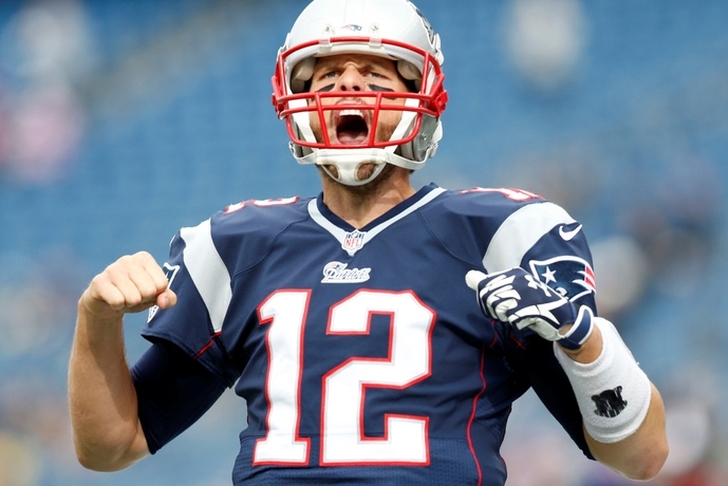 Three weeks of the NFL are now complete, and we have a better idea of which teams are legitimate playoff threats. It's still too early to declare any team the Super Bowl favorite, but it's not too early to start ranking all 32 teams. This list should change quite a bit each week and shouldn't be taken as gospel. While records are a big factor, power rankings are more than just a team's wins and losses. With that in mind, here are the NFL Power Rankings for Week 3.

Maybe the NFL shouldn't have gone after Tom Brady with such aggression. It looks like Brady is trying to make every team he faces pay for what the NFL did to him.

No Jordy Nelson, no problem for Aaron Rodgers. The Packers have played well so far and look like the class of the NFC.

The Cardinals have Carson Palmer back and they are playing like the same team that was destroying their competition before Palmer went down last season. I strongly considered moving Arizona up to No. 2. With an incredible +77 point differential thus far, the Cardinals have a strong argument. I ultimately left them at No. 3 because their schedule hasn't been difficult.

Andy Dalton is completing 66 percent of his passes, with 8 touchdowns and one pick. The Bengals are well on their way to making the playoffs for a fifth straight season. Ben Roethlisberger's injury only helps the Bengals.

The Broncos defense has been incredible. Peyton Manning looked better in Week 3, but there is still room for improvement.

The Bills' only loss is to New England and they are coming off an impressive win against the Dolphins. Yeah, they deserve to take a big jump this week.

The loss of Big Ben is the only reason the Steelers drop in the Power Rankings. They should still be okay with Mike Vick, but it's not the same. If Roethlisberger returns in six weeks or less, the Steelers will be just fine. They have enough talent to win with Vick.

The Panthers are 3-0, but their wins are over the Jacksonville Jaguars, Houston Texans and New Orleans Saints. If they keep winning they'll keep rising, but they need to prove themselves a bit more against better competition.

I'm worried about their offensive line, but the defense looks strong. Week 1 looks like a fluke and the loss to Green Bay is a "good" loss.

The Chiefs could easily be 2-1. They've had a tough schedule so far, but it gets easier. They are threats in the AFC.

Dallas needs to tread water until Tony Romo and Dez Bryant return. The played how I expected them to against the Falcons and don't drop much in the power rankings.

The Jets' defense is carrying them, although Ryan Fitzpatrick can't turn the ball over so often. We'll see if they can continue playing well.

The Vikings looked terrible against the 49ers, but bounced back with a wins over the Lions and Chargers. They look like the second-best team in the NFC North.

The win wasn't pretty, but it's still a win. The Colts have flaws, but they should still be the best team in the AFC South.

A loss to the Bengals is nothing to be ashamed of. The AFC West could be a tough division, so the Chargers have their work cut out for them.

The Rams looked great against the Seahawks, but then lost to the Redskins. They fought hard against the Steelers and shouldn't drop much after a close loss.

The Giants really should be 3-0. With Romo out, the Giants could capitalize.

The Eagles' offensive problems aren't fixed yet, the win over Jets is a good start.

The Raiders looked awful against the Bengals, but rebounded against the Ravens for a close win. Beating the Browns is great, but it's not a high-quality win. The Raiders, Giants and Eagles all made the biggest jumps up the rankings.

The Ravens are 0-3, but they could just as easily be 3-0. They can still turn things around and should start to rise in these rankings.

That loss to the Bills was awful. To be honest, this might be too high for Miami.

I don't trust Kirk Cousins and I don't trust Washington. They had a chance to make a move in the NFC East against the Giants, but blew it.

The Lions have struggled early. It's not time to push the panic button yet, but they need to improve quickly.

A win is win, but does anyone really put much stock into beating the Buccaneers? Still, all the Texans' losses have been close and I wouldn't be surprised if they start winning more.

With such little offensive firepower, it's tough to trust Cleveland this season. They remain ahead of the Titans because of their head-to-head win.

Until the Titans develop some consistency, which might take some time for the young team, they'll be in the bottom third.

After that effort against the Cardinals, I'm starting to think the game against the Vikings was a fluke. I don't trust this team at all. They suffered the biggest drop this week in the rankings.

The Jaguars don't look ready to take a jump in the rankings after getting blown out by New England.

When your only win is over the Saints, you don't deserve a high ranking.

The Bears were in enough trouble with Jay Cutler. With no Cutler, they belong at the bottom of the power rankings.