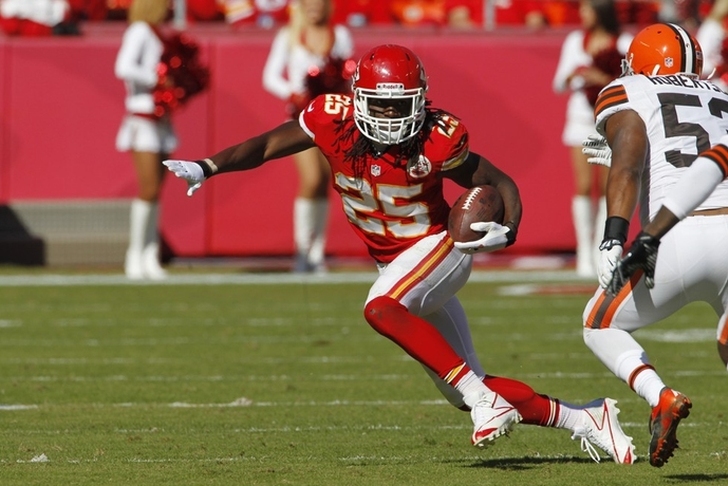 The running back is always a sought-after position in fantasy football and this season will be no different. It's the position that dominates the first round and can ultimately win or lose you a fantasy championship.

Tom Downey and myself are here to make sure you know who to pick and when to pick them! Find his running back rankings here.

Peterson was arguably considered the best running back in the game before missing all of last season. Now on fresh legs, why wouldn't he still be the No. 1 running back?

Guaranteed to be the centerpiece of the Chiefs offense again this year and receives a boost in PPR leagues as well.

Lacy is a wrecking ball coming out of the backfield and is a more than capabale receiver out of the backfield. He has already suffered two concussions in his NFL career and his running style does him no favors, making James Starks one of the more important handcuffs to own.

No way Forte repeats his reception numbers but a 70 reception year isn't out of quesiton and neither is an 1,800 overall yards season. Sound about right for the No. 4 ranked running back.

Still in shock that he didn't get the ball on the final super bowl play. Beast mode will continue to be beast mode again this year and the addition of Jimmy Graham may open up the field a bit more for him.

Bell looks the part of a feature back and showed off his skills last season before missing the playoffs with a knee injury. The knee isn't the reason why he is so low on the list, it's the three game suspension that he is facing. If the suspension is pulled or lowered he rises up this list.

It almost seems like McCoy is being forgotten now that he is not an Eagle. Now in Buffalo with Rex Ryan and Greg Roman, McCoy will likely eclipse the 300-carry plateu yet again. Which will lead to fantasy success.

Anderson ran away with the job last year once he got his chance. Montee Ball hasn't shown that he is a starting NFL RB and Ronnie Hillman is purely a change-of-pace back. Anderson is a solid pick as the featured back in a high-powered offense.

Hill proved to the league last season that he was the real deal. He led the NFL in rushing yards and yards per carry after overtaking Gio Bernard on the depth chart in week 9.

Murray was in a situation last season where he was heavily used and worked behind the league's top offensive line. This year he has changed teams and will be in a crowded backfield, behind an average offensive line and his receptions will go down. All reasons why he is not in the top 10.

Was pounding the table for him last season and said he was going to have a better year than most expected. The same can be true again this year with Pierre Thomas no longer there, even with the addition of Spiller, Ingram is a good pick.

The Dolphins have to figure out exactly what it is that they want from Miller. He has only had more than 20 carries once in his three year career and more than 15 only eight times. He is coming off his best season and the Dolphins would be wise to give him an uptick in usage.

Forsett averaged an impressive 5.4 yards per carry last season and will run behind the same blocking scheme. His receptions should go up a nice amount in new offensive coordinator Marc Trestman's offense.

It's going to be weird to see Gore in a different uniform but a change of scenery will prove good for him. He will provide reliable RB2 numbers in Indianapolis.

Another guy who is being highly overlooked at this point is Alf. Sure his yards per carry has gone done each season but he's been a 1,000 yard rusher every year to go along with 28 touchdowns. Morris is a solid pick where you can get him.

With Deangelo Williams finally out of the picture in Carolina, Stewart has the opportunity to showcase his talent. He comes with an injury risk and hasn't played in all 16 games since 2011.

I think Gordon will be given the keys to the car right away in San Diego and he will turn a lot of heads on his way to a phenomenal rookie season.

I'm a fan of Abdullah as much as the next guy but that doesn't mean that Joique Bell is all of a sudden going to be a forgotten man. The Lions have always liked to use two running backs and this year, Bell will undoubtedly be the early-down back.

This list is starting to pile up with uncertainties. Ellington was a productive running back last season, especially in PPR, but his body broke down and he ended the season on the IR. It became apparent that Ellington can't "carry the load" and the Cardinals drafted David Johnson in the third round. It looks like a committee approach with Ellington being the leader.

Hyde will take over as the featured back this season with Frank Gore moving on to Indinapolis. He showed flashes of what could be last season, but the offensive line lost two starters and the passing game may not be much help. It might be tough sledding for Hyde and the running game.

Early reports have Yeldon being the leading candidate to get a lot of the volume in the backfield. Gerhart was a major disappointment last season and Robinson is more of a change-of-pace guy. Even in a struggling offense, Yeldon will see plenty of opportunity.

It's going to be very difficult to replace Demarco Murray in Dallas and they are hoping that Randle can be that guy. The job is his to lose with only Darren McFadden and Ryan Williams behind him on the depth chart. Can't hate the fact that he is behind the best offensive line in the NFL either.

Yes, it's the Raiders and yes Trent Richardson is still there. Who knows what they are going to do but if they think they may have something in Murray they should explore it and give him the opportunity that he deserves.

Spiller is finally out of Buffalo and in a good fit for his style of play. He will still be backup to Mark Ingram but Sean Payton and the Saints get plenty creative on offense to where Spiller could carve out a nice role.

Remember when Doug Martin was the next elite running back? He is now down to 210 pounds and has reportedly looked quicker in camp. He has received all first-team reps thus far and will probably rise up the list as drafts get closer.

Mason is atop the depth chart right now in St. Louis and as I mentioned in my Rams Preview, I don't see St. Louis rushing to get Gurley on the field as long as Mason is healthy.

Blount is a TD machine who has scored 16 of them in his last 18 games with the Pats. They didn't address the backfield over the offseason after losing Ridley and Vereen so it looks like Blount's backfield to take advantage of. His one game suspension will be overcome if he continues to score like he has.

Sankey was unimpressive last season as a rookie but as of now he is the starting running back for the Titans and could be worth a late-round flier.

Jennings may get a lot of the early down work to begin the season but I'm not a Jennings believer, in talent or health wise. There has been a lot of buzz surrounding Vereen and he could be a very solid sleeper pick.