2013 Fantasy Football: Who is HOT, Who is NOT and week 1 surprises 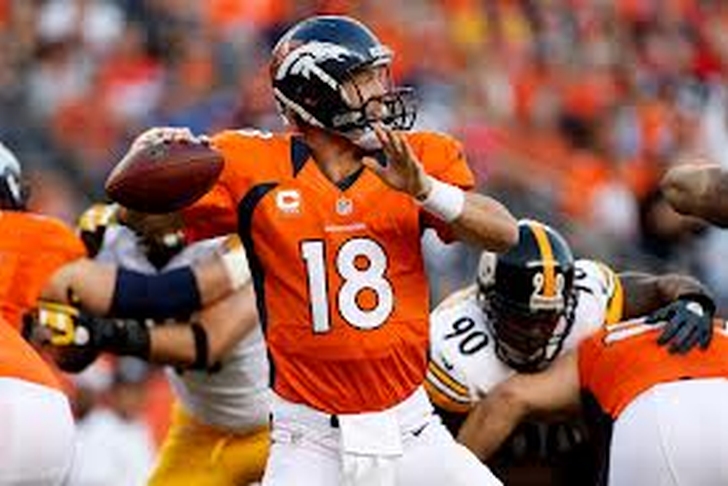 Fantasy football week 1 is officially under way. Week 1 got off to a smoking hot start for the Denver Broncos, with Peyton Manning throwing an absurd 7 TD's, spreading the wealth around to WR Demaryius Thomas, Wes Welker and TE Julius Thomas, who each scored 2 TD's each.

Sunday's stats were void of top rushers, with only 1 RB eclipsing 100 yard rushing (Raiders QB Terrelle Pryor also achieved this feat) . Shane Vereen of the Patriots notched 101 yards rushing with a broken wrist suffered during the game, which will now keep him out 4 weeks.

WR and QB's really were dominant this week. 11 QB's threw for 299 yards or more, while 16 WR's achieved 100 yards receiving or more, with RB Reggie Bush also surpassing this mark. Only 4 QB's threw for 3 TD's or more, which kept QB fantasy points from being astronomical.

For the point totals below, we take into account ESPN points, in a standard 0.5 ppr league.

Manning came out on fire on Thursday night in front of the entire country, going 27-42 for 462 yards, 7 TD;s and no INT. With Manning's ability to spread the ball around (3 receivers with 2 TD's), you have got to feel great if you drafted a Broncos WR or TE on your team also.

Manning is firmly the #1 player in any fantasy league our there and is looking great this coming week, facing a Giants defense that looked hapless against the Cowboys in week 1.

Kaepernick looked razor sharp, going 27-39 for 412 yards passing and 3 TD's. He added only 22 yards rushing, so his duel threat capabilities were not on display, but that didn't really matter. The Packers were likely completely focused on stopping the 49ers QB from running, after Kaepernick ran for an absurd 181 yards and 2 TD's in the January playoff matchup between these teams. Kaepernick was ranked anywhere from #6-9 at QB for most leagues, so anyone who drafted him likely got incredible value by drafting him in the 5th, 6th or even 7th rounds.

What the heck were the Ravens thinking by trading Boldin to the 49ers for a 6th round pick? Boldin quickly became the #1 WR of the 49ers, being completely in sync with Colin Kaepernick all day, catching 13 balls for 208 yards and 1 TD. With the 49ers offense focusing more on the pass this year, Boldin could end up vaulting a fantasy team to the top of the standings in their league.

Adrian Peterson provided a flash bang and momentary giddiness with a 78-yard touchdown run on his first carry of 2013, but didn't do much running the football after that. After his initial run, Peterson only had 15 yards rushing the rest of the way. But, he

remains HOT due to the fact that he has 2 rushing TD's and added a receiving TD, as well as 18 yards and 4 catches.

Richardson was a 1st round pick in nearly every draft out there, but played like a backup vs. the Dolphins on Sunday. Trent only had 13 carries for 47 yards on Sunday, providing very little positive outlook for those who drafted him with their #1 pick. The Browns threw the football 53 times on Sunday in new coach Rob Chudzinski's offense... bad news for owners of Richardson.

Lynch looked slow and uninspired vs. the Panthers this weekend carrying the ball for 17 times for a paltry 43 yards and no TD's. The Seahawks struggled as a team before making a comeback to win, so there is a hope that the team had an off day and Lynch will recover and have a great season.

The #1 WR by a mile scored 5 points? Yikes. Teammate Reggie Bush had over 60 more receiving yards than Johnson, who was targeted 9 times by Matt Stafford. The Lions O looked well polished, and given that Stafford was looking sharp bodes well for Johnson owners this season, but producing 1/4 of the points expected is quite a disappointment from Johnson.

From ESPN: Cook enjoyed a monster debut with his new team, as he found the end zone twice and amassed 141 receiving yards in Week 1. It actually could have been even better for Cook's owners. His 47-yard first-quarter reception culminated in Cardinals DB Tyrann

Mathieu stripping him, Don Beebe-like, as Cook appeared to be running free inside the 10-yard line.

Hankerson went undrafted in nearly every fantasy league on the planet, yet was a huge performer in week 1. The 3rd year player only had 3 TD's last seasons, yet scored 2 in week 1. We wouldn't drop a drafted player to pick him up YET, but if you have a free roster spot of injured player, this might be a big pickup if he can remain productive all season.

It seems like every player for the Broncos had a HUGE week 1, and Thomas is no exception. He was widely undrafted, and was the #1 waiver pickup thus far in week 1. If he is somehow available in your league, pick him up NOW. 5 catches, 110 yards and 2 TD's in week 1... and Peyton Manning loves his Tight Ends, so Thomas is likely to become a star in his 3rd year in the NFL.