'Shut your mouth and eat it... it's f***ing embarrassing': Mikel Arteta's X-rated RANT at his Arsenal players after Champions League hopes were ended by 'f***ing unacceptable' Newcastle defeat is revealed in All or Nothing documentary 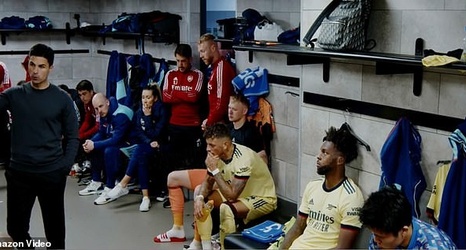 Mikel Arteta called Arsenal's performance against Newcastle 'f***ing embarrassing' and 'unacceptable' in a clip from All or Nothing: Arsenal.

The Gunners manager's obscene, sweary rant after a 2-0 loss against the Magpies, that effectively cost them Champions League football, was aired in Amazon's documentary.

All or Nothing's final two episodes of the eight-part series are released for streaming online on Tuesday.

And the final episode reveals Arteta's furious dressing-down of his players in an X-rated tirade after a Ben White own goal and Bruno Guimaraes strike in the penultimate game of the season proved fatal to their European hopes.