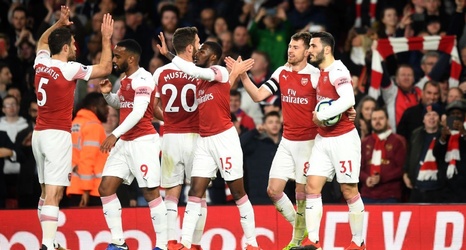 Arsenal scored either side of half-time to beat Newcastle 2-0 on Monday and move into third place in the Premier League ahead of Manchester United and Tottenham in the Champions League places.

Arsenal looked to have taken the lead on 12 minutes when Aaron Ramsey pounced on a flicked-on header following a corner, but the referee waved it off after calling a foul on Sokratis just before the goal.

Ramsey found the back of the net again at the half-hour mark and this time the goal stood as the ball found the Wales international in the Newcastle area and slipped a left-footed shot past Martin Dubravka to the far post.