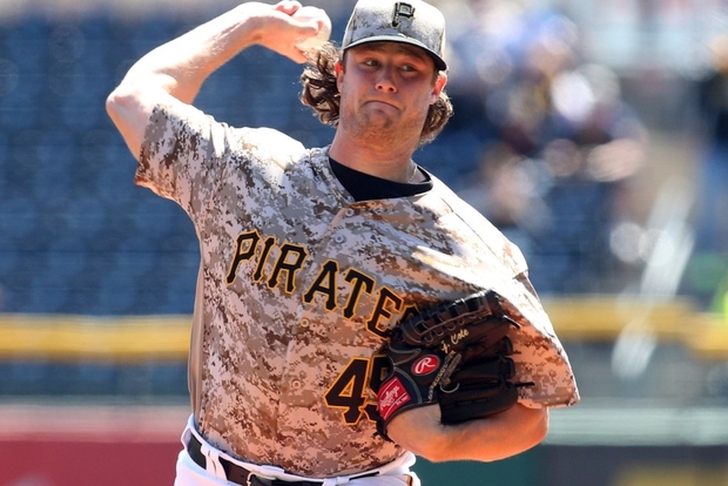 The New York Yankees have been bringing holiday cheer this offseason, in hopes that it brings plenty of cheers during the season. Yankees general manager Brian Cashman has been bringing presents in all offseason. Today may be Christmas but the Yankees are proving that they don't take any days off. To make sure you don't miss anything on Christmas here are all the latest Yankees news & rumors you need to know:

Yankees Targeting Former Draft Pick
The former draft pick who got away is Pittsburgh Pirates starting pitcher Gerrit Cole and his name is circulating the Yankees rumor mill more than any right now. He refused to sign with the Yankees after they selected him in the 2008 draft, but may find himself wearing pinstripes soon. The issue with the Yankees getting Cole is the Pirates want Gleyber Torres, the Yankees top prospect, but he is not available.

A source from NY Daily News said, they believe, the Pirates could center a deal around outfielder Clint Frazier and righthander Chance Adams could be included, as well as third base prospect Miguel Andujar. Fraizer is 23 years-old and hit .231 with four home runs and drove in 17 RBIs in 39 games. Adams is the Yankees fourth best prospect while Andujar is the Yankees fifth-best prospect.

Cole is coming off a season where he had a 12-12 record with a 4.26 ERA in 203 innings pitched. He may not be the ace, but would join a pitching rotation with Luis Severino, Sonny Gray and Masahiro Tanaka already in it.

Yankees May Pass On Machado For Now
Baltimore Orioles third baseman Manny Machado is one of the hottest tickets available since the Orioles announced he was available this offseason. He more than likely won't be a Yankee this season because of the huge contract Giancarlo Stanton was given, but there is always next year.

Machado has only one year left on his current contract, which means next year he will be up for grabs. The Yankees aren't in desperate need for a third baseman since they have Andujar as the main option this season. Considering how this offseason has gone and since the Yankees haven't "moved the needle" for Machado yet, it looks like just rumor talk

#Yankees and #RedSox both remain interested in Manny Machado, though none have “moved the needle” in talks with #Orioles, reports @nickcafardo.

The Bronx Bombers may have more cap space next season if they are able to deal outfielder Jacoby Ellsbury away which means more room to add Machado.

New Third Base Coach
Phil Nevin will be the new man at third base waiving the Yankees home in 2018. He is 46 years-old and spent last season as the San Francisco Giants' third-base coach after managing at Triple-A Reno from 2014-16.

Nevin and new head coach Aaron Boone's older brother, Bret, both went to El Dorado High School in Placentia, California. Nevin was interviewed by MLB.com about being hired by the Yankees and joining Boone.

"Aaron and I go back a little bit," Nevin said. "I kind of grew up in the Boone house. When I went behind the plate to catch for a couple of years, Bob [Boone's father] was the first guy I went to. The Boone family has always been special to me. We've always been close. To be able to get a chance to work with Aaron and be part of this is something special."

Nevin played 12 seasons in the MLB with the Astros, Tigers, Angels, Padres, Rangers, Cubs and Twins.