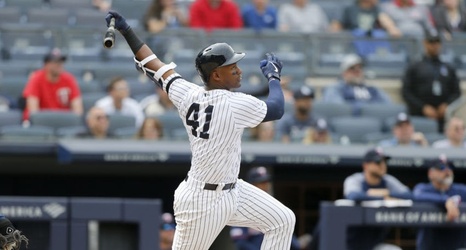 NEW YORK, NEW YORK - MAY 04: Miguel Andujar #41 of the New York Yankees in action against the Minnesota Twins at Yankee Stadium on May 04, 2019 in the Bronx borough of New York City. The Twins defeated the Yankees 7-3. (Photo by Jim McIsaac/Getty Images)

New York Yankees fans watched injury get added to insult in the waning innings of Thursday afternoon’s series-ending loss to the Houston Astros.

Not only did Jose Altuve get “revenge” on his “haters” (who hate him because of something he definitely did) with a late, game-winning home run, but Gio Urshela left with a knee injury following a headlong dive on a hotshot down the line.