Yankees: Losing this many Gerrit Cole starts is unforgivable 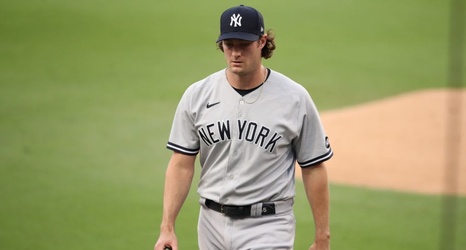 SAN DIEGO, CALIFORNIA - OCTOBER 05: Gerrit Cole #45 of the New York Yankees walks off the mound at the end of the first inning against the Tampa Bay Rays in Game One of the American League Division Series at PETCO Park on October 05, 2020 in San Diego, California. (Photo by Christian Petersen/Getty Images)

Not sure how much of the Yankees’ season has gone “according to plan” so far, but racking up the losses in Gerrit Cole starts and reaching the .500 plateau definitely wasn’t written in stone before the year started.