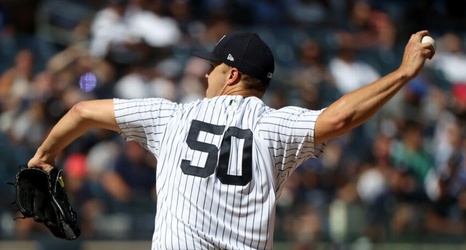 NEW YORK, NEW YORK - SEPTEMBER 06: Jameson Taillon #50 of the New York Yankees throws a pitch during the top of the seventh inning of a game against the Toronto Blue Jays at Yankee Stadium on September 06, 2021 in the Bronx borough of New York City. (Photo by Dustin Satloff/Getty Images)

Hey, you know how New York Yankees No. 2 starter and AL July Pitcher of the Month Jameson Taillon hasn’t looked quite right lately?

Really since mid-game against the Minnesota Twins in late August?

Since his sixth-inning collapse against the Twinkies that resulted in a closer-than-desired victory, the starter has appeared to hit a wall, posting outings of 3.