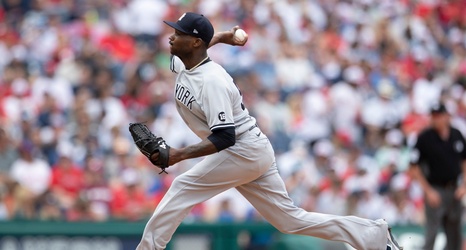 PHILADELPHIA (CBSNewYork/AP) — Aaron Nola allowed three hits and struck out nine, leading Philadelphia over the New York Yankees 7-0 Sunday for a two-game sweep that moved the Phillies back over .500.

Odubel Herrera, Jean Segura and J.T. Realmuto combined to go 7 for 13 with a double, a triple, four runs scored and five RBIs. Philadelphia has won four straight games and three straight series, giving the Phillies a winning record for the first time since they were 22-21 before play on May 20.

Domingo Germán (4-4) fell behind 4-0 by the second inning, a day after Jameson Taillon trailed 4-0 in the first.