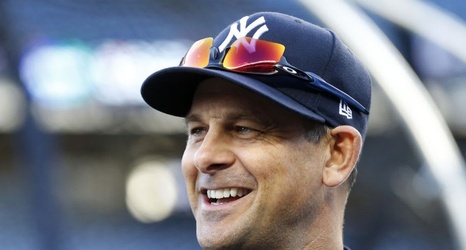 NEW YORK, NEW YORK - OCTOBER 04: (NEW YORK DAILIES OUT) Manager Aaron Boone #17 of the New York Yankees looks on before game one of the American League Division Series against the Minnesota Twins at Yankee Stadium on October 04, 2019 in New York City. The Yankees defeated the Twins 10-4. (Photo by Jim McIsaac/Getty Images)

Are you sitting down, Yankees fans? Have you had your Tuesday morning post-loss coffee yet?

If you’re still midway through, we recommend swallowing the hottest gulp before listening to Aaron Boone’s postgame press conference from Monday in Baltimore.