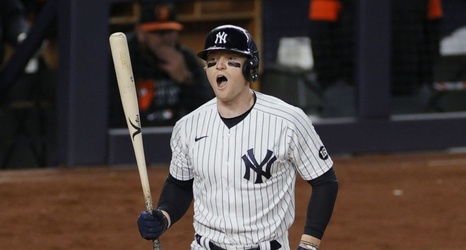 NEW YORK, NEW YORK - APRIL 06: Clint Frazier #77 of the New York Yankees reacts during the third inning against the Baltimore Orioles at Yankee Stadium on April 06, 2021 in the Bronx borough of New York City. (Photo by Sarah Stier/Getty Images)

He hasn’t started for two consecutive games after a tough first week of 2021, but that’s what starting left fielders typically do, per the Yankees. They don’t start.

Mountain out of a molehill here.