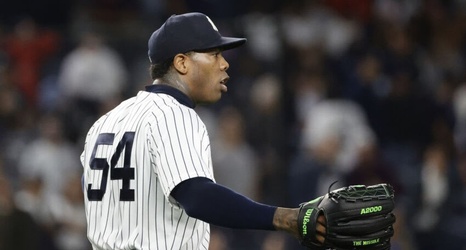 NEW YORK, NEW YORK - JUNE 23: Aroldis Chapman #54 of the New York Yankees reacts during the ninth inning against the Kansas City Royals at Yankee Stadium on June 23, 2021 in the Bronx borough of New York City. (Photo by Tim Nwachukwu/Getty Images)

Yankees closer Aroldis Chapman is a powerhouse when he’s “on,” but more importantly, he’s a pent-up ball of fury and a creature of habit — something Aaron Boone still doesn’t seem to realize after nearly four years of trying to facilitate his success.

Whether it’s a bum fingernail, a decided lack of stickiness, or something else entirely, Chapman has been off more often than he’s been on lately, throwing up all sorts of regression on the mound that has turned his fantastic start into a distant memory.