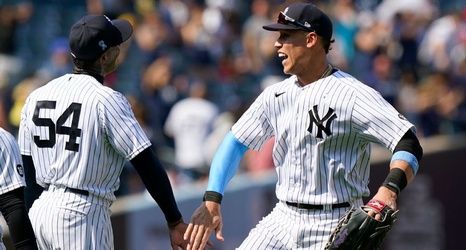 NEW YORK -- The New York Yankees turned their record-tying third triple play of the season to strand the go-ahead run in the ninth inning, bailing out closer Aroldis Chapman in a shaky outing and sealing a 2-1 win over the Oakland Athletics on Sunday.

Gary Sanchez spoiled Sean Manaea's gem with a go-ahead two-run double in the sixth inning, and Jonathan Loaisiga (7-2) and Lucas Luetge turned a 2-1 lead over to Chapman in the ninth.

A night after reaching 103.4 mph during his 15th save -- his fastest pitch on a strikeout since the 2017 AL wild-card game -- Chapman walked Jed Lowrie and Chad Pinder on nine pitches, topping out at 98 mph.