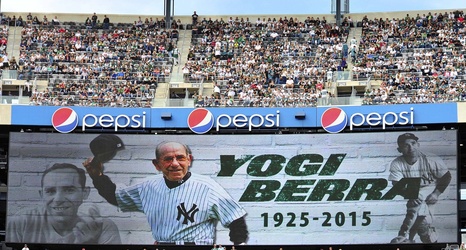 Lawrence Peter Yogi Berra was one of the most popular New York Yankees of all time. With all the discussion on who will be the Yankee catcher next season, I thought it would be appropriate to look at one of the Yankees’ most iconic catchers. Yogi was a long time catcher, coach, and manager for the Yankees. Berra was born in 1925 to immigrant parents Pietro and Paolina Berra in the Italian neighborhood of the “Hill” in St. Louis, Missouri. His real name was Lorenzo Pietro Berra. To fans, he was just “Yogi.”

He learned how to catch while playing baseball in the local American Legion baseball team.