Inside wild Yankees roller coaster that ended it all 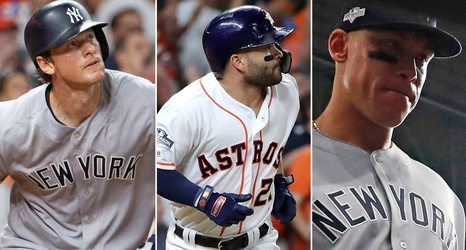 HOUSTON — It took exactly 30 minutes. There were 44 pitches thrown. It flanked both sides of midnight on the East Coast, cast a schizophrenic spell on the 43,357 inside Minute Maid Park, from elation to depression, back again.

When Roberto Osuna threw the first pitch of the ninth inning of ALCS Game 6 Saturday, a 98 mph four-seam fastball that brushed Gio Urshela back, hitting Martin Maldonado’s glove up near his eyes, it was 11:47 p.m. Eastern Time, and it didn’t look like the Yankees season would reach midnight. They were down, 4-2, and the crowd was already chanting, “THREE!