BOSTON, Mass. — On this date in 1999, the New York Yankees defeated the Boston Red Sox, 6-1, in Game 5 of the ALCS at Fenway Park. The victory clinched the second consecutive American League pennant for the Yankees and their 36th in franchise history. 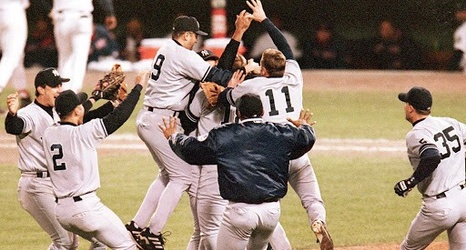 Shortstop Derek Jeter staked New York to an early lead with a two-run homer to center off Kent Mercker in the first frame.

Jeter spurred another rally in the seventh inning against Derek Lowe. The Yankee shortstop reached on an error by third baseman John Valentin and advanced to second base. Paul O’Neill singled to right, setting up runners at the corners and chasing Lowe from the game. Bernie Williams coaxed a walk against Rheal Cormier to load the bases. The ensuing batter Chilli Davis reached on an error by second baseman Jose Offerman, enabling Jeter to score.