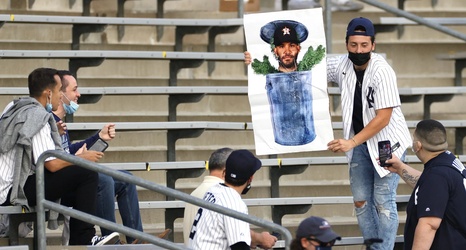 Yahoo Sports | Jack Baer: If you haven’t heard, the Astros are in town. In the first meeting between the Yankees and Houston since the latter’s banging scheme was exposed, the Astros were treated to raucous boos from the Bronx faithful. Some fans got creative with taunting signs, a few trash can props were confiscated, and jeers rained down particularly hard on Alex Bregman, Carlos Correa, and Jose Altuve. For one night at least, some found catharsis in berating the one team in the league fans now love to hate as much or more than the Yankees themselves.