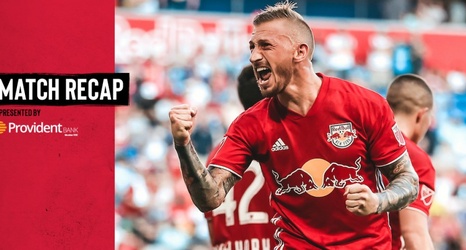 Things tend to be contentious when the New York Red Bulls and New York City FC meet, and the latest edition of the Hudson River Derby offered up controversy to match the antagonism at Red Bull Arena.

NYCFC raced out of the gates with a dominant start, Heber firing the visitors into a deserved early lead, only for the Red Bulls to claw back into the game via a Daniel Royer penalty kick on the eve of halftime. The Austrian popped up on the hour mark to beat Sean Johnson again with a deftly-flicked header to the far post, but the quality of the finish was eclipsed by the confusion and anger surrounding the play.