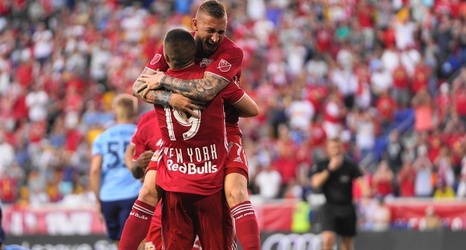 Daniel Royer scored his sixth and seventh goals of the season in the Red Bulls’ 2-1 win over New York City FC at Red Bull Arena on Sunday in a game rocked by controversy.

Royer scored from the penalty spot before halftime to tie the match at 1-1. He then scored quickly after a disputed throw-in in the 60th minute for his first multi-goal game of the season. The win in the Hudson River Derby lifted the Red Bulls (9-7-4, 31 points) three spots to third in the Eastern Conference standings.

Royer headed the Red Bulls into the lead in the 60th minute on a sequence that left NYCFC protesting the decision to award the hosts a throw-in instead of a corner.