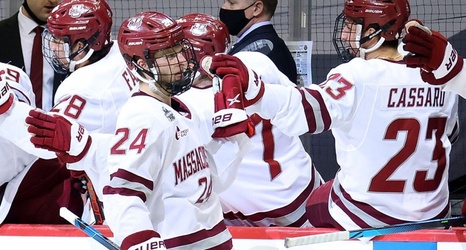 Zac Jones #24 of the Massachusetts Minutemen celebrates his goal with the bench in the first period against the Minnesota Duluth Bulldogs during the Division I Men's Ice Hockey Semifinals at PPG Paints Arena on April 8, 2021 in Pittsburgh, Pennsylvania. Credit: Getty Images/Gregory Shamus

Defenseman Zac Jones, whom the Rangers signed to an entry level contract this week, just days after he won an NCAA championship with UMass, practiced with the full team for the first time at Thursday’s morning skate. But Jones, 20, was not in the lineup against the Devils, and coach David Quinn didn’t know when he will get a chance to put him in.