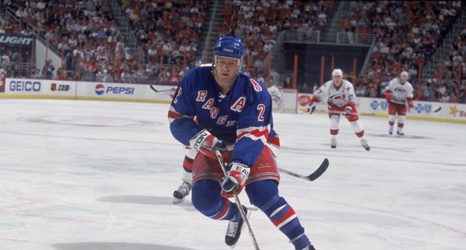 5 Oct 2001: Brian Leetch #2 of the New York Rangers controls the puck during the game against the Carolina Hurricanes at the Entertainment & Sports Arena in Raleigh, North Carolina. The Hurricanes defeated the Rangers 3-1.Mandatory Credit: Kent Smith /Allsport

The New York Rangers have had many great players don their classic jersey, but which are the top-five all time?

Then, just this morning, the NHL tweeted this:

Both of these posts got me thinking – if you, the passionate fans of New York, were asked to pick who you think the best Rangers of all-time were, who would you choose?