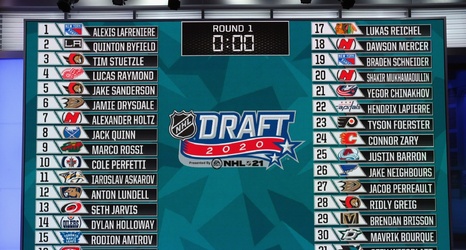 SECAUCUS, NEW JERSEY - OCTOBER 06: A general view of the draft board following the first round of the 2020 National Hockey League (NHL) Draft at the NHL Network Studio on October 06, 2020 in Secaucus, New Jersey. (Photo by Mike Stobe/Getty Images)

The New York Rangers will pick 15th in the NHL Entry Draft first round on Friday night. There is a very good chance that the team will trade that pick, but until that happens, it’s worth looking at who the Rangers could pick.

Every year, as we assess the draft, we draw on the rankings from the most respected talent evaluators in hockey.